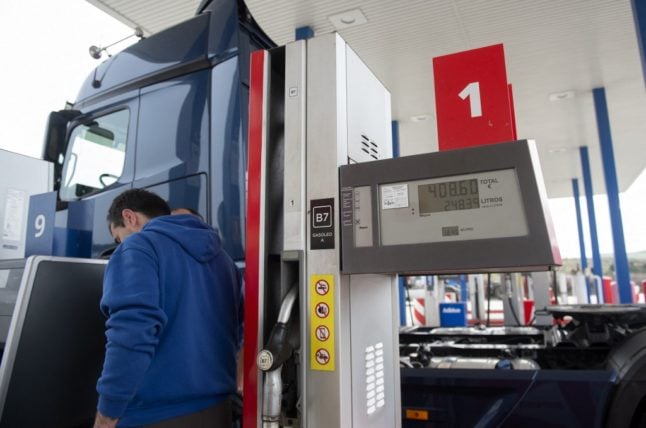 A lorry driver puts some petrol in his vehicle at a petrol station in Pamplona on March 15, 2022. - Energy prices have risen sharply in recent months, driven by strong demand triggered by the revival of the economy following the covid-19 epidemic. This dynamic accelerated considerably after the start of the war in Ukraine on February 24, especially in the European Union. (Photo by ANDER GILLENEA / AFP)

This follows an ongoing truck drivers’ strike, production stoppages, mass protests by farmers and fishermen, all adding to a period of social discontent in Spain, one that’s being replicated elsewhere in Europe.

Of the €16 billion promised, the Spanish government will release “approximately €6.0 billion in direct aid and tax rebates and €10 billion in state-guaranteed loans to cushion the impact of the crisis on families and businesses”, Sánchez told a business forum on Monday.

So what are the measures proposed and which are likely to come into effect in the coming days?

Ban on layoffs and other job-protecting measures

Spanish employers will not be able to sack any employees until June 30th under the government’s plans.

“Companies will be able to resort to internal flexibility measures such as furlough (ERTE),” Sánchez pointed out on Monday about the scheme which was available to struggling businesses during most of the Covid-19 pandemic, having only ended last February.

Although all the job protection measures are yet to be disclosed, Labour Minister Yolanda Díaz has hinted her department also wants to prevent company salaries from being lowered during this period of high inflation and sky-high energy costs.

Minimum bonus of 20 cents on every litre of fuel

The Spanish government plans include “a minimum reduction of 20 cents per litre of fuel”, Sánchez said.

The State will finance 15 cents whilst the oil companies will cover 5 cents, although Sánchez praised the fact that some multinationals have committed to subsidising an even higher cost.

Last week, the government announced a similar reduction but only for lorry drivers, with the new reduction to impact everyone.

This non-contributory benefit that Spain’s Social Security offers guarantees a minimum income to people without work or unemployment benefits.

The benefit, which ranges between €461 and €1,015 depending on different factors, will be increased on average by 15 percent.

Extension of VAT reduction for electricity

The Spanish government reduced VAT on electricity bills from 21 percent to 10 percent in June 2021, deciding in December to extend the measure until April 2022, before the crisis in Ukraine pushed prices to even more exorbitant levels.

What is likely to happen next is that this drop in IVA (VAT in Spanish) will be extended yet again until further notice in order to help vulnerable consumers.

This reduction in VAT on the bill will apply to all consumers with a contracted power of up to 10 kilowatts, provided that the average monthly price of the wholesale electricity market is above €45 per megawatt/hour (Mwh).

Even though they didn’t set a final amount, the Spanish government has announced it will put a “cap” on the price of gas for the production of electricity as an “exceptional” measure that will reportedly not curtail incentives for renewables nor distort the market, and will allow “electricity prices to be significantly lowered immediately.

This will be approved shortly across Europe, Sánchez said, “and the next day it will be published in the Spanish BOE bulletin with immediate effect on the electricity bill”.

Additionally, there will continue to be a temporary suspension of the 7 percent tax on electricity production.

READ ALSO: How to apply for a discount on your Spanish electricity bill

Rents can’t be raised by more than 2 percent

Landlords will not be able to increase the rent of tenants by more than 2 percent for the next three months.

One of the consequences of the rise of the Consumer Price Index in Spain is that many landlords are using this general increase in costs to raise the rents of their tenants.

This is legal, but only in certain circumstances.

Renting in Spain: Can my landlord put up my rent due to rising inflation?

There will be a new line of credit guarantees of a value of €10 billion offered by Spain’s Official Credit Institute to cover liquidity needs caused by the temporary increase in the cost of energy and fuel, as well as extended grace periods for repayment.

The government has also promised an aid package of €362 million for the agriculture and livestock sector, and another of about €68 million for Spain’s fishing sector.

As for the industrial sector, a large consumer of energy that has suffered the rise in prices in particular, €500 million will be allocated to help soften the economic blow.

A further €450 million in direct aid will be offered to freight and passenger transport companies. Depending on the type of vehicle, the amount they receive will vary from €1,250 per truck, €900 per bus, €500 per van and €300 per taxi.