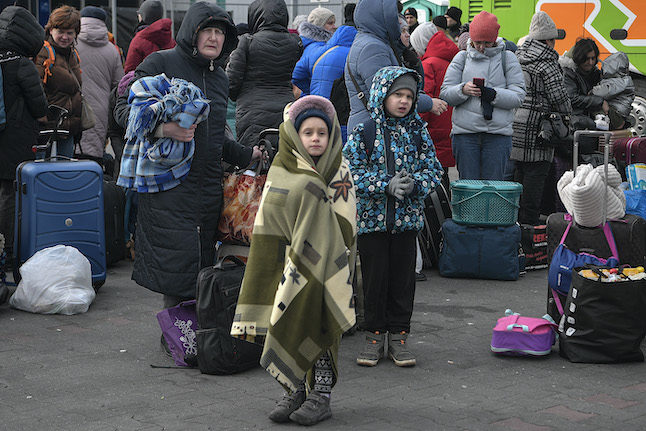 As per the EU’s activation of the Temporary Protection Directive announced last week, the Spanish government on Tuesday approved the measure waive visa rules for Ukrainian refugees and allow them temporary residence in Spain.

The Temporary Protection Directive means that any Ukrainian citizen can stay within the EU or Schengen zone for a year without having to apply for a visa or make a claim for asylum. During this time, they will be allowed to work, have access to healthcare and financial support and children will be able to go to school in Spain.

The Spanish government has agreed to extend this measure further to include third-country nationals who had residence in Ukraine at the time of the Russian invasion.

In a recent press conference, spokesperson for the Spanish government, Isabel Rodríguez said that Ukrainian nationals who were in Spain since February 24th and could not return home, would also be able to access the residence and work permit, as well as those who were in an irregular situation before this date.

According to the latest Spanish government statistics, this means that it could also include around 15,000 Ukrainians in Spain who were already living in Spain, but who were not legally registered or who had not applied for their certificate of empadronamiento.

She also confirmed that this measure includes the spouses of those who request protection and their children who are minors.

Rodríguez also added that the government aims to simplify the procedures involved in order to give them access to a residence permit quickly.

The Spanish government website confirms that “If you are a Ukrainian national and wish to enter Spain, you do not need to apply for a visa if you have a biometric passport. If you are Ukrainian and want to enter Spain, but you do not have a biometric passport or travel documents, you can go to a consular office of a country bordering Ukraine (for example, Poland, Romania, Hungary, etc.) to have your situation studied”.

READ ALSO: How you can help Ukraine from Spain

How many Ukrainian refugees will Spain accept?

The Minister of Inclusion, Social Security and Migration, José Luis Escrivá, has confirmed that Spain will have 12,000 places available for Ukrainian refugees.

In an interview with Spanish national radio Mañanas de RNE, Escrivá said that 6,000 of these places would be provided by the various regions in Spain and a further 6,000 will be provided by the social system. He also added that in the event that there are not enough places available “we will make more”. He said that the government is “flexible”.

“They will know their rights, and will be interviewed upon arrival to find out their needs and be able to refer them to the most appropriate resources,” confirmed Escrivá.

He added that not many people have arrived yet, and those that have, have done so mainly through the family networks of Ukrainians in the country, however he anticipates a mass arrival in the coming days. “We have to be prepared for a significant volume,” he said.

The UN High Commission for Refugees estimates that 1 million Ukrainians have already left the country and this number is expected to increase as Russia intensify their attacks.

Where will the refugees be housed?

Escrivá confirmed that Ukrainian refugees would initially arrive at three different locations in Spain – Pozuelo de Alarcón in Madrid, Barcelona and Alicante. More arrival points could be added based on the number of refugees Spain was receiving.

Support teams will be present to make the new arrivals aware of the rights they’ve been granted in Spain and they will be interviewed to find out their needs. From there, they will be transported to Spain’s various regions to be housed.

The national government, regional governments and city halls are all currently working on a coordinated reception plan, with Castilla y León, Madrid, Murcia and Galicia offering the majority of places so far.

The government of Castilla y León has offered 1,800 residential places to Ukrainian refugees, while Madrid has offered 1,209 places available in social centres for old people, hostels, shelters and homes for domestic violence victims.

Madrid authorities have highlighted that they have 77,000 places available at schools in the region for young Ukrainians.

Spain’s other regions have also offered places to Ukrainian refugees, but significantly less. The Balearic Islands have offered places in hostels and in Navarra and Aragón, families have been identified to take care of unaccompanied Ukrainian children.

The government of the Canary Islands has also agreed to accept Ukrainian refugees, but at the moment they cannot increase the number of places available because their resources are already stretched by refugees and immigrants arriving from Africa, including almost 3,000 unaccompanied minors.

“There is a lot of solidarity and we get all kinds of offers,” Escrivá said in a recent interview with Cadena Ser.