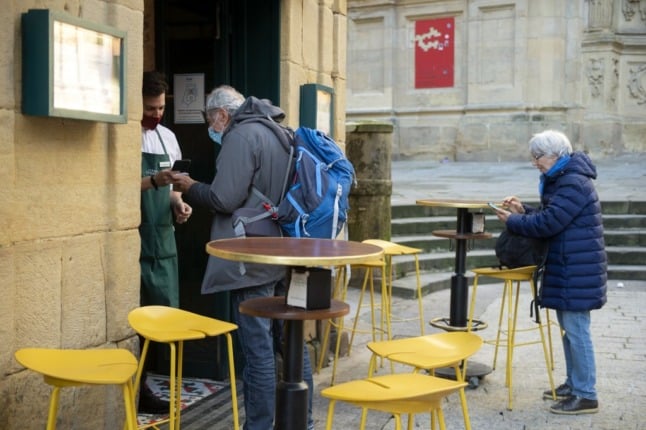 A waiter checks a customer's Covid-19 health pass in front of a bar of the Spanish Basque city of San Sebastian on December 15, 2021. (Photo by ANDER GILLENEA / AFP)

A month ago, a return to the kind of strict pre-vaccination Covid restrictions seen in 2020 was not on the table for Spain’s national government.

For Prime Minister Pedro Sánchez and Health Minister Carolina Darias the focus was on motivating even more Spaniards to get vaccinated and not returning to the days of curfews, closures for the hospitality sector and limits on social gatherings.

Even with the emergence of the Omicron variant, the national government ruled out old measures that “would slow down the economy”.

But Sánchez has been forced to U-turn on his stance regarding new Covid measures, in the face of ever-increasing infections and hospitalisations just days away from Christmas.

In a six-minute televised address on Sunday morning, Sánchez said the presidents of all of Spain’s 17 regions would attend an emergency meeting online on Wednesday afternoon “to evaluate new measures that can be put in place over the next few weeks”.

This could potentially mean that on Christmas Eve or Christmas Day, Spaniards will have a whole new (or old) set of measures to adapt to, or it could be that any tightened restrictions apply just after those dates.

Regional authorities would prefer a common plan which applies across Spain, anything to avoid last year’s scenario where 17 different Christmases played out under each region’s individual rules, causing confusion and a lack of cohesion.

So what restrictions could be introduced over Christmas in Spain?

It could be that regional governments do end up implementing their own rules rather than a nationwide plan, but here are some of the measures that have been suggested by Spanish regional leaders and health bodies.

Having to wear a mask outdoors hasn’t been compulsory in Spain since last June, with the exception of when a 1.5-metre safe distance can’t be kept with people in a crowded place.

Many people in Spain still wear face masks outdoors nonetheless, especially in recent weeks with the rise in cases, but regional governments such as the Basque Country’s, Galicia’s and Castilla-La Mancha’s have suggested that the old rule return.

For Basque leader Iñigo Urkullu, “Covid-19 vaccination is essential, but it isn’t enough” to curb the 45 percent bed occupancy Covid patients have in his region’s ICU wards.

Catalonia is so far the only region in Spain which has requested the return of the curfew, at least in their region, where authorities have said infections are “out of control”.

The Catalan government has requested that its regional high court approve the return of the toque de queda (curfew) from 1am to 6am, and is calling for other restrictions from the earlier days of the pandemic.

If Spain’s regions and the national government were able to reach a consensus over a common strategy, the Covid health pass requirement to enter certain indoor establishments could be one of the easiest measures to agree upon.

So far, 12 regions have implemented the Digital Covid Certificate measure for either the hospitality sector, care homes, hospitals, events or all of these spaces.

Logically, as the Covid health pass rule has been in place for two weeks in some regions and infections are still spiking across the country, the effectiveness of this measure has been called into question, especially given the higher transmissibility of the new Omicron variant.

Andalusian authorities have called for the national government to pass a so-called pandemic law which will give each region similar powers to those that were awarded to regional authorities during the country’s two states of alarm.

During these periods of emergency, they had the authority to implement certain types of restrictions quickly without the need to have them approved by local courts, but now that these states of alarm are over, regional governments need the go-ahead from local judges for the new laws to remain in place.

This has been best evidenced by the problems some autonomous governments have had with their Covid-19 health pass legislation being rejected and considered unconstitutional.

The legal implications of many of the restrictions mentioned in this article could be sidestepped with a pandemic law, but judges across Spain have so far been reluctant to overlook breaches of fundamental citizen rights with Covid measures.

The old limits on gatherings in private or in public

This is likely to be either a recommendation or a requirement in many parts of Spain this Christmas, and the standout theme in a draft of proposed Christmas Covid measures sent by the Health Ministry to the regions.

For private family gatherings, it could be recommended that no more than ten people from two households get together over Christmas. The Basque Country for example has already recommended this, and asked that big get-togethers be avoided if there’s someone vulnerable in the family.

For social gatherings in public places, capacity limits could be made mandatory, similar to those seen at the end of 2020 and start of 2021.

Health experts assisting the regions on their health policies are calling for the capacity of bars, restaurants and nightclubs to be set at 50 percent, a maximum of six people per table, a 1.5 metre separation between tables and early closures.

Religious celebrations and other big Christmas events should have a 50 percent capacity limit and never hold more than 150 people, the Health Ministry also proposes.

If the regions wish to adopt these, it could mean that the capacity of shops and shopping centres is also halved.

It’s worth noting that national health authorities recommend even stricter capacity limits or outright cancellations or closures if regions are in level 4 for infection risk.

Spain as a whole is at the “extreme” risk level currently, with a fortnightly infection rate above 500 cases per 100,000 people.