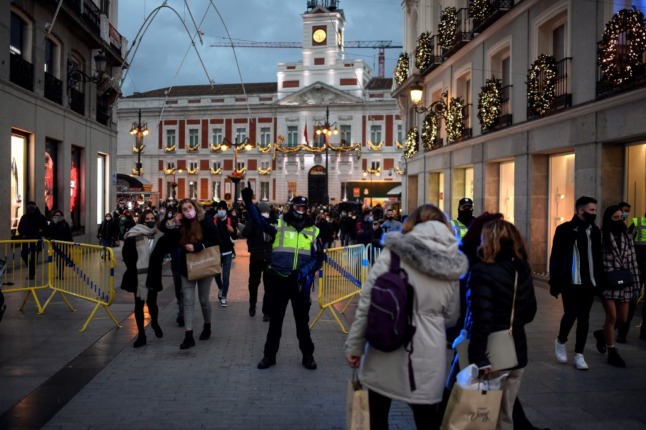 A lot has changed since this article was initially published on November 11th.

Spain had one of the lowest Covid infection rates and hospitalisations across Europe and prestigious medical publication The Lancet said the country was on the cusp of reaching herd immunity, making it an example for its neighbours.

“This Christmas is going to be better than the last,” Spanish Prime Minister Pedro Sánchez said on Wednesday November 10th, stressing that Spain’s infection rate is “far below” that of other European countries thanks to the “high vaccination rate” and “low denialism”.

Ten days away from Christmas and Spain’s fortnightly infection rate now stands at 413 cases per 100,000 people (it stood at 63 on November 11th) and eight regions have reached their high risk level for hospital and ICU pressure.

There are also now 38 confirmed cases of the new Omicron variant, half through community transmission, and more than half of the country’s 17 regions now require a Covid health pass for daily affairs, something which was consistently ruled out by regional judges during the summer period for breaching fundamental rights.

The Covid vaccination of children aged 5 to 11 also started on Wednesday, a decision which many health experts had ruled as unnecessary in Spain given the high vaccination rate among adults.

This pandemic appears to be proving to people in Spain and elsewhere in the world that the situation can dramatically worsen in a very short period of time, and measures and restrictions that previously seemed excessive can again seem justified.

So is there a possibility that old restrictions such as capacity and table limits, curfews or early opeing hours really make a return to Spain this Christmas?

On December 1st, Spain’s government ruled out bringing back domestic Covid restrictions following the discovery of the second case of the Omicron strain in the country, preferring to avoid measures that “slow down the economy” and recommending smaller social gatherings instead.

Health Minister Carolina Darias concluded at the time that her government was not considering any “other scenarios other than reinforcing vaccination”.

However, on the same day health experts who advise Spain’s regions on public health sent a list of recommendations in which they ask that the hospitality industry limit the number of diners per table to 10 and that those who attend Christmas dinners and meals at home undergo an antigen test beforehand.

The limit of people per table is one of the restrictions that Spaniards had to undergo for months in the aftermath of the full national lockdown, whereas the antigen test measure isn’t something which has been applied for domestic matters yet in the country in most cases.

It’ll be the regional governments who decide if such proposals remain recommendations or official restrictions.

On Tuesday, Valencia’s regional leader ruled out the possibility of previous Covid restrictions over the Christmas period in the region, saying it would be “like taking a step back”.

Catalonia, the Basque Country and La Rioja have also announced their governments will not reintroduce old restrictions during the festive period.

On the other hand, the Galician government is considering limiting meetings over Christmas to 8 people, something which has already been approved in the Canary islands for islands on risk level 2 (down to 6 people for level 3 and 4). Bars and restaurants that use the Covid health pass in the archipelago will also be allowed longer opening hours and more capacity.

But for the most part regional governments are not in favour of the old Covid restrictions returning, or instead believe the requirement of the Covid health passport for domestic matters in their territory is enough to limit infections.

There may be cancellations or limits on crowds for large events or other establishments over the festive period as cases rise, but the evidence suggests that overall tough Covid restrictions seen at earlier stages of the pandemic will not make a return, although it still won’t be a normal Navidad.