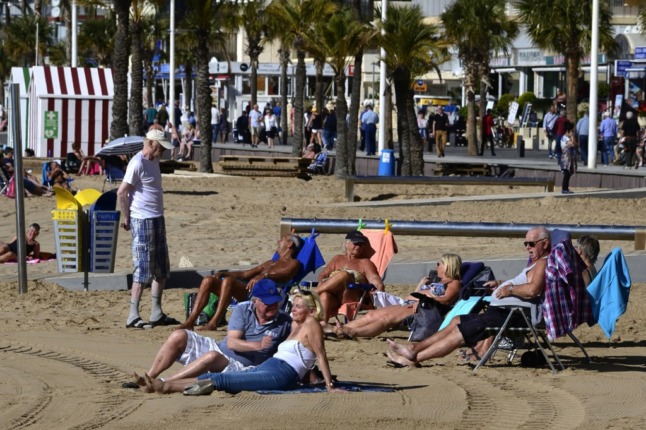 British residents and tourists bask in the sun on the beach in Benidorm. Valencian authorities are now fighting for them to be able to stay as long as they want in the Spanish region. Photo: José Jordan/AFP

The adverse consequences of Brexit on freedom of movement are having a knock-on effect on one of the Valencian economy’s driving forces: UK nationals who spend extended periods of time in Spain.

Authorities in the region that’s popular with British tourists and residents alike recorded a “notable decrease” in visitor numbers in 2020 compared to 2019, dropping from 3 million down to 600,000.

Even though the Covid-19 pandemic and international travel restrictions have clearly had an impact on this slump in numbers, for Valencia’s regional president Ximo Puig “recovering the British market is a priority for the Valencian Community”, and that means resolving the limitations that Schengen rules impose on UK nationals who don’t hold a Spanish or EU residency document following Brexit.

On November 1st, Puig told journalists at the World Travel Market in London that he had urged Spain’s Tourism Ministry to help make it easier for British nationals to spend more than 90 out of 180 days in the region without having to apply for a visa.

This would encompass “British residents in the Valencian region, future home buyers and people who come to visit their families”, which according to regional authorities represents about 100,000 people.

The aim is to avoid the bureaucracy that this extension entails and the difficulties that it poses for British people who want to remain in the region for longer. As the Valencian leader put it, they want to make “Brexit as Brexit-less as possible”.

Puig’s call for the Spanish government to “facilitate the visa situation” and “correct the restrictions” that have come about with Brexit has reportedly already been heard by Industry, Tourism and Commerce Minister Reyes Maroto, who has informed him of the creation of a “mobility” task force made up of Spanish and British embassy teams to work on a joint solution.

Since the start of 2021, Britons who are not in possession of a residency document from Spain or another EU/EEA country can only stay 90 days in any 180-day period within the Schengen Area, including in Spain.

“The 180-day reference period is not fixed,” as the EU explains, “it is a moving window, based on the approach of looking backwards”.

Logically, the Schengen calculation system is confusing many Britons who never had to deal with it before, as well as giving them less flexibility and time in Spain.

2020 estimates based on Spanish government data suggest the number of Britons who own property in Spain is anywhere between 800,000 and 1 million.

Many of these are part of the 380,000 full-year British residents in Spain whose rights are protected under the Withdrawal Agreement, but there are potentially hundreds of thousands more who don’t hold a Spanish residency document for legitimate reasons as they don’t spend more than 183 days a year in Spain and therefore aren’t fiscal residents.

These include Britons who own homes in Spain, who rent out a property, who visit for part of the year to spend time with family and friends, who avoid the cold winter months in the UK, and other types of part-year residents. Some should have registered as residents already, plenty of others were and are within their rights to be tax residents in the UK or elsewhere while spending part of the year in Spain.

READ ALSO: Can second-home owners get a residence permit in Spain?

Britons who fall into this grey area of residency play a crucial economic role in many communities in Spain, especially in Alicante province where the Costa Blanca is located.

It’s therefore no surprise that Carlos Mazón, president of Alicante’s Provincial Council and Tourism Board, met in London with the Spanish Ambassador to the United Kingdom José Pascual Marco on Tuesday to address the situation of British residents in the province after Brexit.

“British residents in Alicante province are a source of wealth for us and one of our best ambassadors for the arrival of British tourism to the Costa Blanca,” Mazón told journalists after the meeting.

“They are fundamental and we are working on reciprocity so that they can also be in our territory for six months in a row when they come to visit us, as these are the conditions that apply for people from Alicante and Spain when they visit the United Kingdom.”

“We’ve launched a common action plan with which to put pressure, work with and achieve this goal, with a view to raising the matter with the British Government.”

Asked how he felt the meeting had gone, Mazón said “it has been very satisfactory and the ambassador is perfectly aware of one of the priorities of Spain’s most British province, with more than 70,000 British residents.”

“This is an urgent need for the tourist and economic interests of Alicante province,” he concluded.