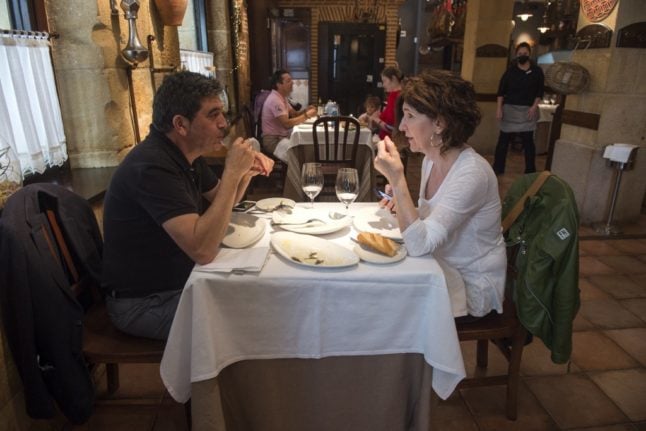 Masks have been compulsory in indoor public settings in Spain since May 2020, with a few exceptions such as for eating and drinking at bars and restaurants. (Photo by ANDER GILLENEA / AFP)

If the Spanish government goes ahead with its plans and approves the Royal Decree on April 19th 2022 rather than earlier, the new indoor mask rules are likely to be in force the next day on Wednesday April 20th.

The proposal comes after weeks of negotiations and toing-and-froing, with some regions calling for the rule to be lifted as soon as possible whilst other autonomous communities as well as health experts have asked for caution.

Last week, Fernando Simón, head of Spain’s Health Alerts and Emergencies, suggested that the chosen date by Spanish health authorities would be on April 12th or 13th, during the Easter holidays.

This had caused concern among epidemiologists who feared that allowing masks to be removed from indoor settings during a period of increased travel and social gatherings could lead to a seventh wave of coronavirus in the country.

For the more prudent health experts in Spain, masks should remain compulsory until at least the summer of 2022, when the fortnightly infection rate falls below 50 cases per 100,000 inhabitants or when there is no longer community transmission.

Over the past three weeks, the incidence of the virus in Spain has plateaued at around 450 cases per 100,000 people.

But the Spanish government is determined to continue finding ways to treat Covid-19 like another endemic disease similar to the flu, having recently decided to stop counting and reporting on each and every case and removing quarantines for asymptomatic and mild cases.

Removing the indoor face mask rule is a further step in this direction, and the Spanish government is well aware that in other European countries such as the United Kingdom, Belgium, Sweden, the Netherlands, Norway, Denmark, Finland and France masks indoors haven’t been compulsory for weeks, if not months now.

Even though the legislation is still not official, sources close to the Spanish government suggest that regional authorities are on board with the proposed April 20th date. Regardless of any potential opposition, the decision to keep or scrap Spain’s mask rules rests solely in the hands of the national government, which has now voiced its intentions and provided an end date.

UPDATE: Where will you still need to wear a mask indoors in Spain?

Further details about in which indoor settings masks will still be required and in which not are yet to be disclosed, as it is unlikely there will be a blanket lifting of face masks in all settings.

Hospitals, care homes and public transport may be among the indoor settings where masks continue to be required.

Face masks have been compulsory indoors in Spain since May 2020. In early February 2022, the Spanish government lifted the rule for outdoor mask wearing, with a few exceptions.