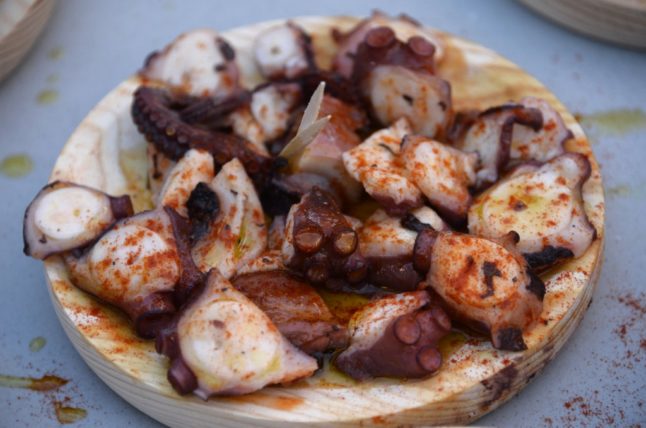 Spain’s tourism agency Turespaña has declared the third Thursday of every June as World Tapas Day.

We’re sure anyone would agree that tapas deserve their own day of celebration, especially those of you who have feasted on melt-in-your-mouth croquetas in a little Spanish bar overflowing with people and food.

A ‘tapa’ was then a small plate of ham or olives used as a lid to keep insects and dust away from a drink. Centuries later, tapas have become a symbol of Spanish culture.

To mark World Tapas Day, we’ve put together a list of classics, from Spanish omelette to sliced octopus generously sprinkled with paprika.

Which is your favourite? A classic, these bite-sized pieces of potato are typically pan-fried or deep-fried and then drizzled all over with a spicy tomato sauce. This brava sauce is a medley of red pepper, paprika, chilli, and other spices depending on which region of Spain you’re in. One of the cheapest and tastiest tapas Spain has to offer. Cold cuts or embutidos are a true Spanish classic. They are typically made from pork and include the beloved Iberian ham, as well as chorizo, the traditional smoked, spicy Spanish sausage. In many bars, the jamón is freshly cut into delicate slivers in front of you, and served by itself or with a bit of bread and cheese. While chorizo comes in many varieties including ones with garlic, honey, or a red wine glaze. Spanish croquettes are bite-sized, deep-fried snacks usually loaded with various ingredients mixed in béchamel, a sauce of butter, flour, and milk. They’re deliciously crispy on the outside and soft on the inside, and loved for their versatility. A croqueta can be stuffed with any combination of cheeses, shellfish, potatoes, meat, and vegetables, making it the perfect go-to tapa for vegetarians. The classics are jamón, bacalao (cod), boletus (wild mushroom), queso cabrales (blue cabrales cheese), calamar en su tinta (squid in ink) and espinacas (spinach).

Padrón peppers are a classic Spanish tapa. Photo: Jessica Spengler / WikiCommons
A plate of lightly fried and salted small green Padrón peppers is a great addition to any tapas order. They’re small enough to be eaten whole and typically have a mild flavour, however once in a while, you may be lucky enough to get a spicy one. Choco – the Spanish word for cuttlefish – is a tender, delicious fish usually cut into long slices and fried. This gives them a satisfying crunch on the outside and an incredibly soft texture on the inside. A tortilla with potatoes and garlic shoots. Photo: su-lin/Flickr.

The tortilla de patatas is Spain’s unofficial national dish. The simple yet hugely satisfying potato omelette is the staple of practically every Spanish menu, from the hole-in-the-wall bars to the fanciest of restaurants. But it’s also a dish that divides opinion like no other – onions or no onions? and runny or dry? being the two most debated questions when it comes to the popular dish. 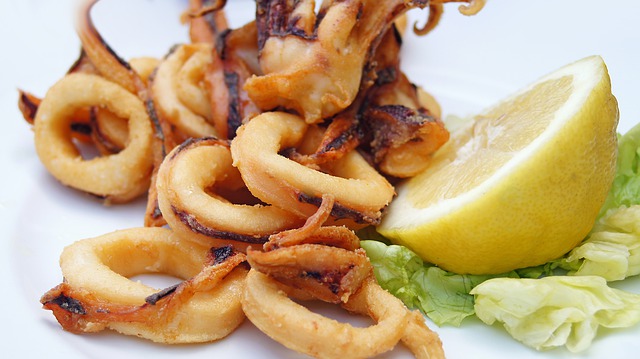 Calamares should be sprinkled with fresh lemon juice. Photo: Bart-ter-Haar / Pixabay
Of course, you can’t have a proper tapas table without battered squid rings. These are traditionally from Andalusia, but can be found all over Spain on almost any tapas menu. However, they’re best eaten by the sea, sprinkled with lemon and served with a cold caña or glass of beer. This fish is served in the form of tender filets known for their distinctly tangy, salty taste. This is because they’re usually fried or marinated in vinegar as well as liberally salted. They can also come in the form of boquerones, marinated vinegar, olive oil, and seasoned with garlic and parsley. This tapa makes a healthy dish with some Mediterranean olives because it’s packed with vitamins and beneficial fatty acids. 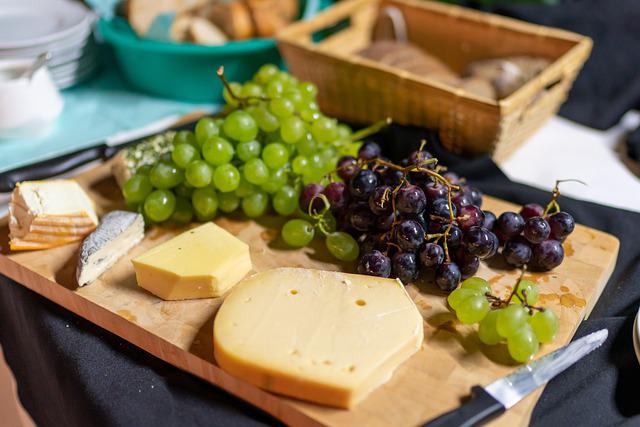 A cheese board may come with fruit or jam. Photo: Volker Gröschl / Pixabay
Cheese boards are not only loved in France, but they feature on many Spanish tapas menus too. They typically feature the famous queso Manchego from Castilla La-Mancha, as well as a soft goat’s cheese (queso de cabra), a blue cheese such as the Cabrales cheese from Asturias and several hard and semi-hard cured cheeses made from either cow or sheep milk. Freshly-caught octopus is softened by boiling in salted water and then sliced up, drizzled with olive oil, and sprinkled with paprika for flavour. Although often served as an entire plate, you’ve lucked out if you are offered it as a tapa. A typical dish from Galicia it can now be found all over Spain, but retains its distinct Galician-style flavour. Fresh shrimp cooked in garlic and olive oil, lightly crispy on the outside and juicy on the inside, is a delicacy especially popular along Spain’s coastline. To add a punch, they’re sometimes finished off with a dash of red pepper and parsley.

Battered aubergines drizzled in a dark sugar cane syrup, they refer to as honey, are a firm favourite from Andalusia. Crispy on the outside and gooey in the middle, their origins come from the Moors, who rules the southern part of Spain for many years. They’re a great option for vegetarians, who may feel like they’re missing out on many of the typical tapas dishes.

READ ALSO: ‘What did the Moors ever do for us?’ How Spain was shaped by Muslim rule An albóndiga is a rich, savoury Spanish meatball loaded with pork or beef. Ideal for warming up in colder weather, a couple of these make for a satisfying tapa, along with a sauce of lightly seasoned tomatoes, parsley, or almonds. Popular in Córdoba and the rest of southern Spain, flamenquín is a long roll stuffed with slices of Iberian ham wrapped in pork loin. It’s breadcrumbed and fried to give it that perfect golden-brown colour. 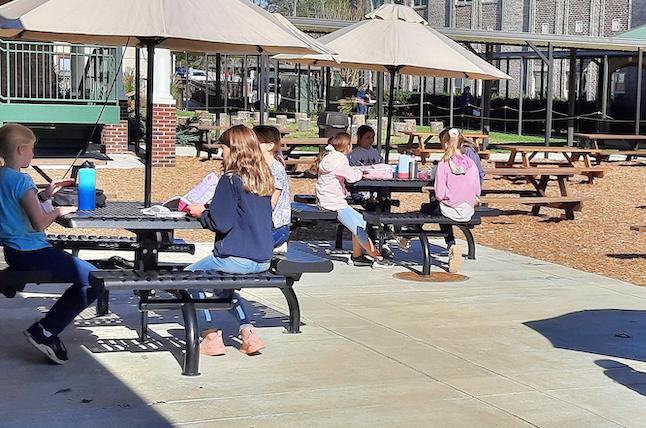 Spain’s Labour and Social Economy Minister is calling for the country’s large supermarket chains to each prepare a fixed-price shopping basket of food and other daily goods that could allow consumers to circumvent the 13.8 percent inflation (August figures) that’s forcing Spaniards to tighten their belts and change their eating habits.

“Our proposal is that large distributors reach an agreement and that through business margins they ensure an affordable shopping basket for our country,” Yolanda Díaz said last Thursday after meeting with the executive director of Carrefour, Alexandre de Palmas.

The French supermarket giant had already come up with a list of 30 basic products for €30, although this has come under scrutiny for including items such as a kilo of sea salt and a litre of sunflower oil which don’t need replacing every week, but no fresh or staple products such as meat, fish, milk or eggs.

This doesn’t fit Díaz’s suggestion of “an affordable shopping basket with quality products” stacked full of proteins and fresh produce, but for many business owners belonging to Spain’s food sector the concept in itself is flawed.

According to a joint statement by Spanish supermarket associations ANGED, ACES and ASEDA, large, medium and small establishments all reject the Spanish government’s proposal as they consider it “unfeasible and counterproductive”, one that could cause “serious competitive risks” by benefiting large supermarkets to the detriment of smaller ones, as well as negatively affecting consumers in smaller towns and villages that don’t have hypermarkets.

“(Spain’s) food distribution industry cannot accept the agreement of a shopping basket at fixed prices and asks the Spanish government to help to control the food CPI”, the associations stressed, adding that whilst the sector has seen its production, packaging and logistical costs rise by 12.8 percent, they’ve fought to maintain the price rise for consumers no higher than 6.7 percent on average.

Instead they propose that the Spanish government introduce a temporary reduction in VAT on food and an energy price fix for the entire food supply chain.

But Díaz, together with Spanish Consumer Affairs Minister Alberto Garzón, continue to insist that their government will draft a list of food, cleaning and other key products that will serve as a guide for supermarkets and hypermarkets that wish to implement the affordable shopping basket if they see fit.

In 2011, the French government managed to convince two of its leading supermarkets, Carrefour and Cora, to put together a shopping basket of essential goods in the face of rising prices caused by the Arab Spring. In this particular case, the list did include fresh produce, from chicken, cheese and fish to kiwis, oranges and apples.

READ ALSO: Nine ways to save money on grocery shopping in Spain 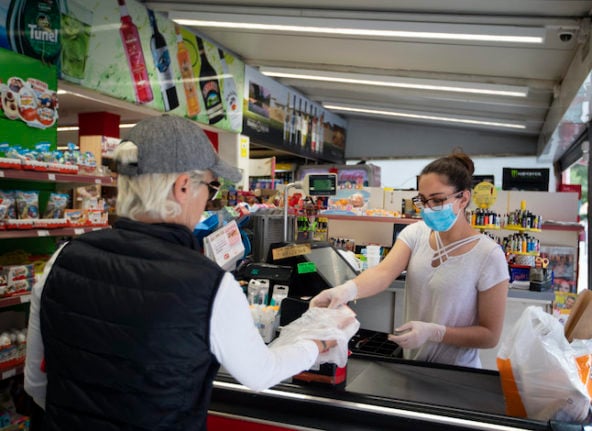 MONEY
Nine ways to save money on grocery shopping in Spain
Url copied to clipboard!