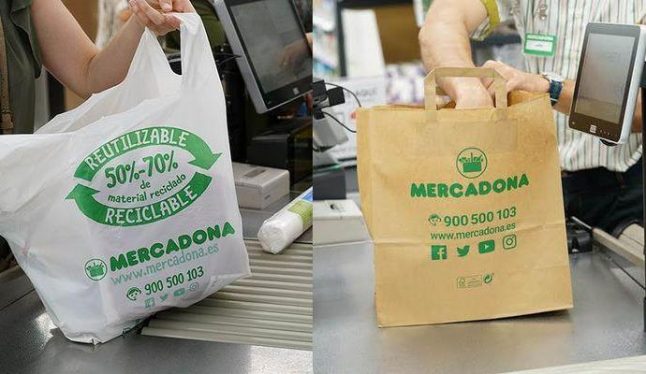 Valencian supermarket chain Mercadona is the latest 'supermercado' in Spain to do their bit for the environment by making their packaging habits more sustainable and cutting plastic use.

From Monday April 15th, customers will be able to choose between paper bags, recycled plastic bags (made from 50 to 70 percent recycled plastic) and raffia baskets. Both of these standard-sized Mercadona bags will cost 10 cents each.

That means that the regular single-use plastic bags Mercadona has always offered are now a thing of the past.

Through their efforts, Mercadona hopes to take the current figure of 3,000 tonnes of plastic recycled every year even higher.

Unfortunately the supermarket chain has not yet eliminated the smaller single-use transparent bags it offers customers to carry fresh produce.

A new bag dispenser is being introduced in some stores in the hope of reducing wastefulness, but according to Spanish news reports the plan is for Mercadona to get completely rid of these smaller single-use bags by 2021.

Mercadona is the latest supermarket chain operating in Spain to take action against plastic waste, less than a month after Carrefour announced it would allow customers to bring their own Tupperware into their supermarkets.

In May 2018, the Spanish Parliament passed a new law that made it illegal for shops in Spain to give out plastic bags for free, although the measure only seems to be primarily observed in supermarkets.

The average Spaniard consumes 144 plastic bags a year, 90 percent of which are only used once for between 12 and 25 minutes, before being thrown in the bin.

Readers' tips: Which supermarket in Spain is the best to shop at?