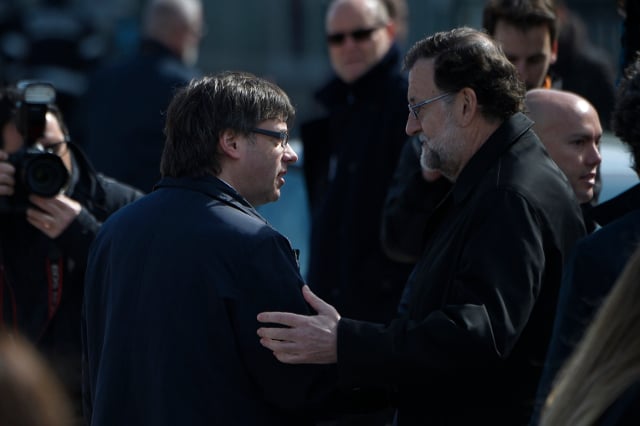 Spain's PM Mariano Rajoy reacted by giving Puigdemont until October 16th to clarify whether he had declared independence or not, but in his written response the pro-independence leader avoided answering that question, reiterating his desire for dialogue.

The two governments continue to be locked in a political stalemate therefore, with the Spanish government threatening to activate article 155 of the country's constitution and intervene in Catalan autonomy, and the Catalan government not renouncing a declaration of independence.

But what exactly is Puigdemont trying to achieve by avoiding the big question of an independence declaration? Political scientist Pablo Simón, a visiting professor at the Carlos III University of Madrid (UC3M), thinks his strategy is all about shifting the blame to the Spanish government:

“His ambiguous response is an attempt to transfer the final responsibility for applying article 155 to the central government”.

The Catalan president will have been conscious that Rajoy would not accept his offer of dialogue as an answer, Simón believes.

“He absolutely knew that. Right now we're seeing a blame game, proof that no one has any interest in negotiating.”

University of Girona political science professor Carles Ferreira sees Puigdemont's actions as an attempt to satisfy people with differing opinions on how the independence push should proceed.

“I think he's continuing to opt for a strategy of building strength and legitimacy, both internally and externally. Internally, in terms of the Catalans who agree Catalonia is a nation and has the right to decide, but don’t see a unilateral strategy as the clear one. For those people, the message is that they have a sensible government that will use all possible options for dialogue,” he told The Local.

“Externally, it's so that the world will see that one party (Catalonia) is asking for dialogue and international mediation, while the other (the Spanish state) responds only with threats and repression. I also think it’s a strategy by Puigdemont to try and buy time in the face of internal movement within his party – a part of which is against a unilateral solution to the conflict.” The Catalan leader has failed to please all even within the pro-independence movement however. Popular Unity Candidacy (CUP), the radical anti-capitalist party that helps prop up Puigdemont’s Together for Yes (Junts pel Si) coalition in the Catalan parliament, has pressed him to declare independence. So too has influential grass roots organization Catalan National Assembly (ANC), whose leader Jordi Sanchez was one of two pro-independence activists detained by a Spanish court for sedition on October 17th.

There is a risk therefore that Puigdemont could alienate some of his allies by stopping short of an outright declaration.

“I think that’s exactly the risk of the strategy. A call for mediation and dialogue will bring moderates closer to the secessionist position, but it will push away the most radical. The people who want 'fast-track independence' could feel disappointed,” Ferreira noted.

Jordi Armadans, political scientist and director of Foundation for Peace (FundiPau), pointed out that there is no way of keeping all parties happy:

“We're at a time where any step at all will disappoint or not sufficiently satisfy all parties. It has to be understood that decisions and solutions that emerge from a tense and conflict-filled process are never completely satisfactory for anyone”. Protests in Barcelona over the detention of two separatist leaders. Photo: Lluis Gene/AFP

According to UC3M’s Simón, it is unlikely that the pro-independence group will crumble however, especially after the detention of activists Sanchez and Jordi Cuixart, which sparked protests across Catalonia.

“It's unlikely the bloc will crack immediately – in the past they have reached agreements at the last minute. CUP knows well that its ability to influence is greater now than if it sparked an early election, and as such it will always prefer for the independence process to move forward even if it's not at the speed it would like. On top of that, the court decision to imprison two pro-independence leaders for sedition makes it even more certain the group will unite,” he said.

With continued posturing on both sides, it is difficult to predict what will happen next. Will the Spanish government trigger article 155 of the constitution? Or, will the Catalan separatists finally make a fully-fledged declaration of independence? In reality, neither party wants to be the first to act, several of the experts believe.

“It's clear the Catalan government is avoiding making a unilateral declaration of independence, and the Spanish government is avoiding activating article 155. That's the situation, a sort of game of cards and positioning, where everyone wants the other person to be the one to show their cards, that's being prolonged,” Armadans judged.

“Both responses are ones rejected by moderates and the international community, and neither party wants to be the first to activate them. We're now part of a game of unfulfilled threats,” University of Girona's Ferreira observed.

“The magnitude of the Spanish state's response – the level of repression with which it acts – will dictate how strongly the Catalan government's position is reinforced. I think the Spanish government will prepare the most proportionate response possible.”

But UC3M's Simón thinks the triggering of article 155 and intervention in Catalan autonomy is likely, and the consequences will not be pretty.

“Everything suggests we're heading towards the use of article 155 of the Spanish constitution, which would mean removing self-government and the executive from Catalonia in a temporary manner in order to re-establish Spanish law. That process would mean the conflict is irreversibly entrenched for a long period of time. It doesn't look like there's reason to be optimistic in the short term,” he concluded.

READ ALSO: Legal experts on what would happen if Catalonia declares independence