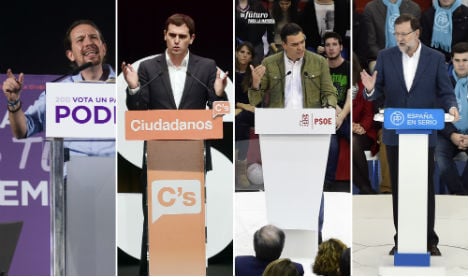 After a 14-day marathon campaign, the conservatives of incumbent Prime Minister Mariano Rajoy are hoping for re-election despite stiff competition not just from their traditional Socialist rivals, but by two upstart parties vying for change — the centrist Ciudadanos and anti-austerity Podemos.

“Spaniards decide today the profile of a new political era,” top-selling daily newspaper El Pais wrote on its front page while rival newspaper El Mundo warned that “the risk of ungovernability is real”.

Sky-high unemployment, inequality, corruption and an ever-rising separatist drive in the northeastern region of Catalonia are just some of the issues at stake in a country deeply scarred by a financial crisis.

Polls predict that Rajoy's ruling Popular Party (PP) will win the largest share of the vote but without the absolute majority it needs, which will force it to form an uneasy alliance with another political grouping or rule as a minority government.

And all bets are on as to who will come second in the legislative elections, as the Socialists could end up neck-and-neck with Ciudadanos and Podemos, which would give these new parties unprecedented influence on the political scene.

“The fact that a tectonic shift is about to shake up the Spanish political system is testified by the expected 80 percent turnout… compared to 69 percent in the 2011 election,” analysts at UniCredit say, calling Sunday's polls “historic.”

One in four undecided

Ana Salazar, head of research and strategy at consultants Red Lines, says the shake-up in Spanish politics started when Podemos emerged in 2014 on the back of an “Indignados” movement fed up with austerity-triggered inequality and corruption.

Then came Ciudadanos, which was formed in 2006 in Catalonia but only truly emerged nationwide this year.

“Now we have… the old versus the new,” she says.

And with one in four voters still undecided, the outcome of Sunday's elections remains a mystery.

Post-election scenarios: Who will be Spain's next Prime Minister?

Rajoy, the 60-year-old austere, grey-bearded and bespectacled premier, has positioned himself as a safe pair of hands who dragged the country away from economic collapse when he took power in 2011 and put it on the path of recovery.

After years of on-off recession, the government predicts the economy will grow 3.3 percent this year — to the envy of many of its European neighbours.    But unemployment remains stubbornly high at more than 21 percent, and Rajoy's rivals point to glaring inequalities brought on by his drastic spending cuts, tax rises and health reforms.

Socialist (PSOE) chief Pedro Sanchez, the 43-year-old economist who only last year took over a party still reeling from its 2011 defeat, has promised to reinstate the rights of workers and immigrants he says have been trampled on.

Ciudadanos chief Rivera, who at 36 is the youngest of the four main party leaders, has promised “reasonable change” and pledged to do away with precarity in the workplace.

But the question mark of the elections remains Podemos, whose pony-tailed, 37-year-old leader Pablo Iglesias is now a household name.

Seen as running out of steam just months ago, the Syriza ally appears to be gaining ground again thanks to Iglesias's down-to-earth appeal and his move away from the more radical, far-left ideals Podemos once espoused.

So much so that polls suggest Podemos may even replace the long-standing Socialists as the country's main left-wing party.

Whatever the outcome, though, the run-up to elections has generated hope.

“We can't go on drifting like this. The politicians we have are not resolving our problems,” says Jose Luis de Andres, a 58-year-old unemployed man in Madrid.

“This is an opportunity.”