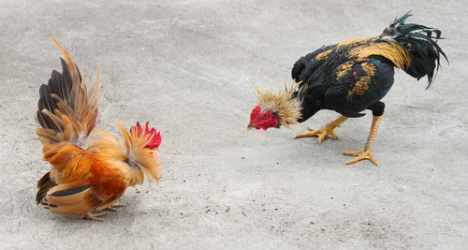 The ruling Popular Party (PP) decided not to include two amendments that would have banned cock fighting, which has been taking place in the Canary Islands for more than 500 years.

The amendments, tabled last week by the Republican Left of Catalonia (ERC) to be included in the penal code reform bill, would have seen cock fighting outlawed, with prison sentences from six months to two years for those caught promoting the blood sport.

"The PP’s refusal to ban cock fighting falls within the many exceptions that are made to animal abuse and we are ashamed that Spain is going to maintain these old fashioned practices," a spokesman for the ERC told The Local.

"Cruelty should not be protected by law," he added. "We are saddened by the position of the Spanish government but we would be lying to say it surprised us."

In Spain, Andalusia and the Canary Islands are the only autonomous communities in which cock fighting is legal.

In the Canaries, the 1991 law for the protection of animals permits cock fighting "in those localities where they have been celebrated" although it banned bullfighting. The cockfighting tradition dates back over 500 years, when the islands were first conquered.

Fighting cocks are prepared for the ring at around 18 months old. Injuries are par of the course during cock fights; it is not unusual for the animals to lose one or both eyes, and, according to Spanish daily El País, around one in every ten cocks dies in the fight.