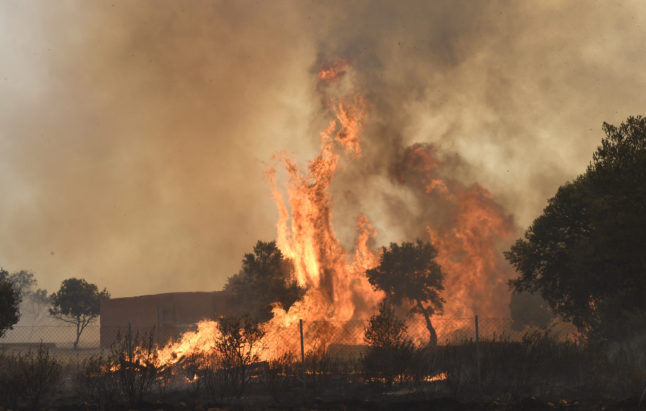 Flames rise from a forest fire near the village of Pumarejo, northern Spain, on July 18, 2022. (Photo by MIGUEL RIOPA / AFP)

Close to 200,000 hectares (495,000 acres) of forest in Spain have been lost to fire so far this year, more than in any other nation in Europe, according to the European Union’s satellite monitoring service EFFIS.

Portugal has lost just over 48,000 hectares to flames, the third highest amount in Europe that is only surpassed by Romania.

The spread of wildfires depends on the weather, the type of vegetation and the topography of the land, said Monica Parrilla, a forest campaign manager with Greenpeace Spain.

“Right now we have the ideal context for very intense fires,” she added in a reference to the scorching temperatures, strong winds and drought conditions Spain and Portugal have faced.

And the only factor which humans have some control over is the vegetation, Parrilla added.

“When it is dry, it feeds the fire. We need to focus on this flammable vegetation,” she said.

Parrilla called for brush to be cleared in woodlands either manually or through controlled burns, and for more firebreaks — a barrier of open land intended to check a wildfire. 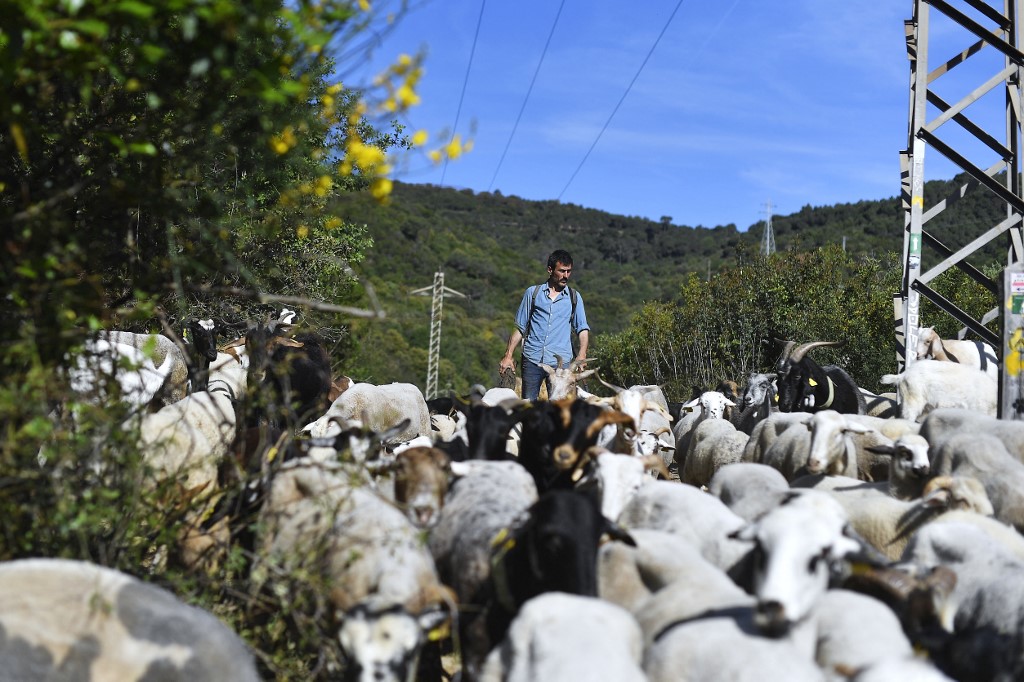 (FILES) In this file photo taken on May 12, 2022 Spanish shepherd Daniel Sanchez, 36, herds his flock of sheep and goats to help reduce the risk of wildfires by clearing vegetation at the natural park of Collserola, near Barcelona. (Photo by Pau BARRENA / AFP)

Fire-resistant trees
To be more “fire-resistant”, forests also need to be made up of a greater variety of trees, she said.

Most forest area in Spain and Portugal is made up of monocultures of eucalyptus and pine trees, which are favoured by the paper industry but are highly flammable.

Around 36 percent of both Portugal and Spain’s land mass is covered by forest, according to World Bank data.

And about one-quarter of Portugal’s forests are eucalyptus, a fast-growing tree  native to Australia.

Fully 83 percent of the land ravaged by flames in Portugal between 2011 and 2020 consisted of pine and eucalyptus trees, according to figures from the Institute for Nature and Forest Conservation.

Ecologists in Portugal are calling for the planting of more indigenous tree species that better resist fire, such as chestnut, cork and oak trees.

Financial incentives should be given to small producers “so they can wait several years for these more resistant trees to become profitable,” said Marta Leandro, vice president of Quercus, Portugal’s biggest environmental group.

This would prevent them from “systematically turning to eucalyptus”, she added. 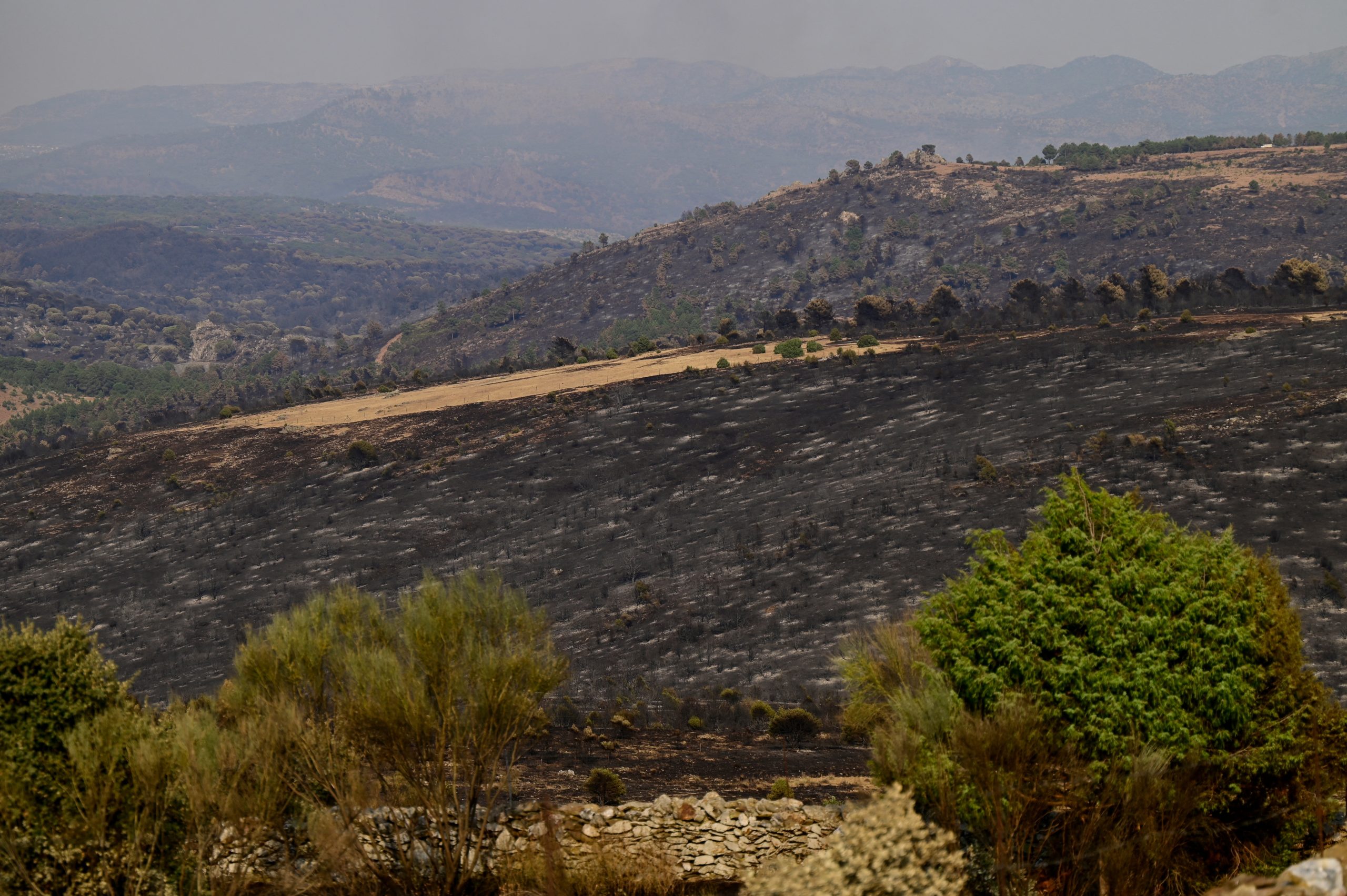 This photograph shows a burnt area following a wildfire in Cebreros, near Avila, on July 20, 2022.  (Photo by JAVIER SORIANO / AFP)

Many fields are abandoned and undergrowth left wild because the landowners are too old.

There are also fewer farm animals, such as goats, which help clear the land of scrub.

The biggest wildfires in Spain have been in the most sparsely populated regions like Extremadura in the west and the northwestern region of Castille and Leon.

Spain’s Ecological Transition Minister Teresa Ribera on Thursday stressed the importance of rural residents, saying they are “the real guardians of the land who are on the front line in the prevention of fires all year round”.

Similar views have been expressed by politicians in neighbouring Portugal, where forest fires in 2017 killed over 100 people.

While goats and sheep are already being used in some parts of Spain and Portugal to clear undergrowth, ecologists call for the development of extensive livestock farming.

“Investing in prevention” is not an expense but an “investment in the future” because the cost to put out a wildfire is higher “by far”, said Loures Hernandez of WWF Spain.