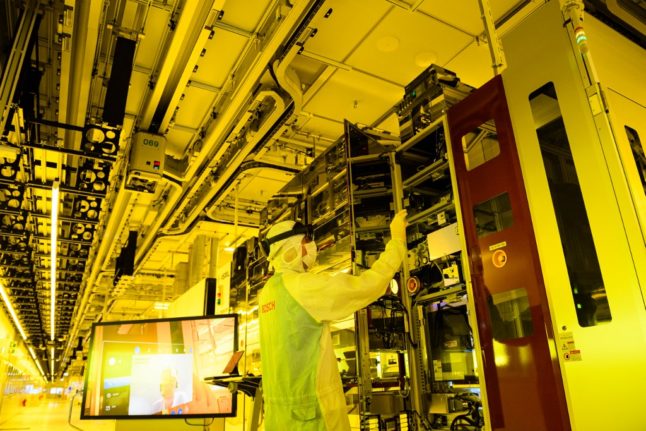 Spain wants to lead the way in Europe in terms of microchip and semiconductor development. (Photo by JENS SCHLUETER / AFP)

The goal of the programme financed mostly with European Union Covid-19 relief funds is for Spain “to become a key player in the global semiconductor value chain,” Prime Minister Pedro Sánchez tweeted.

“We aim to create a solid ecosystem for the future of computing in Europe and attract large investments in the semiconductors industry,” he added.

Sánchez met with the heads of chip makers Intel and Qualcomm on Tuesday at the World Economic Forum being held at the Swiss resort of Davos to discuss the plan.

It will cover “the entire value chain from design to chip manufacturing,” Economy Minister Nadia Calvino told a news conference after a weekly cabinet meeting that approved the plan.

“The aim is to comprehensively develop the design and production capacities of the Spanish microelectronics and semiconductor industry,” she added.

Mainly made in Asia, semiconductors and microchips are needed to make a wide range of products from cars to washing machines to smartphones.

An unexpected surge in demand due to expanding digitalisation and supply change problems caused by the pandemic has created a global shortage of semiconductors and microchips.

The shortage has slowed manufacturing activity, with automakers pausing production and electronic device makers struggling to keep up with demand for phones, TVs and gaming consoles.

The European Union in February unveiled a €43-billion plan to quadruple the supply of semiconductors in Europe by 2030 and reduce its dependence on Asia for the key component.

The aim of the plan is to double its current semiconductor market share to 20 percent in 2030.

Tax Minister María Jesús Montero told La Sexta television channel it is important that “we can finance the aid” put in place to support “the middle class and workers”.

To this end, the government will impose an “exceptional” tax on Spain’s “big fortunes”, she said.

The tax will last for two years and affect “no more than one percent” of the population, Montero said.

“When we talk about rich people, we are talking about millionaires,” she added.

The minister did not provide details on what the tax rate would be or how much it would raise.

The announcement comes just days after Andalusia’s regional government decided to scrap its wealth tax for residents and non-resident homeowners with worldwide assets above €700,000, in a bid to attract higher earners to the southern region.

This has sparked a debate in Spain over whether it is fair for some regions (those governed by the right-wing Popular Party to be exact) to offer better tax conditions than others and then ask for an equal or bigger slice of the pie from the national state budget.

Montero has accused regions such as Madrid, which has long been the region with the lowest taxes in Spain, of carrying out unfair fiscal competition, what’s referred to in Spain as ‘tax dumping’.

READ MORE: Why you should move to Madrid if you want to pay less tax

Spain’s leftist government in July introduced a draft bill to create a temporary tax on banks and power utilities to fund measures to ease cost-of-living pressures.

Spain is battling a surge in inflation as a result of the fallout from the war in Ukraine and the reopening of the economy after pandemic-related lockdowns.

The annual inflation rate hit 10.4 percent in August. It has remained in double digits since June, a level not seen since the mid-1980s.

The Spanish government has introduced a raft of measures to help people cope with soaring prices, such as free public transport, stipends for students to stay in school and subsidised petrol.

It says the measures amount to €30 billion  ($30 billion), or 2.3 percent of Spain’s gross domestic product.