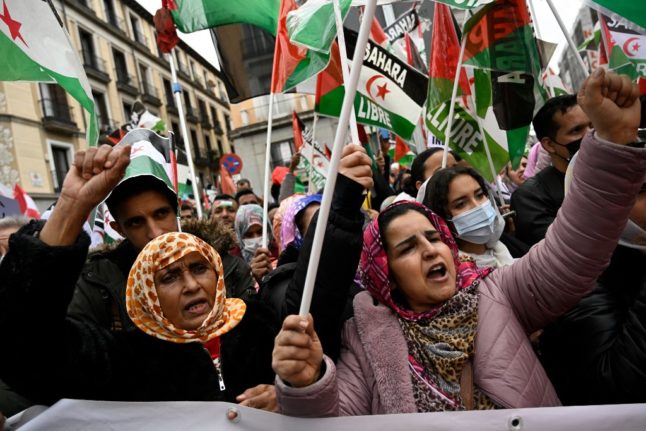 Demonstrators take part in a protest against the Spanish government support for Morocco's autonomy plan for Western Sahara, in Madrid, on March 26, 2022. - Western Sahara is designated by the UN as a "non-self-governing territory" whose people "have not yet attained a full measure of self-government". (Photo by Pierre-Philippe MARCOU / AFP)

Algeria, which backs the Polisario independence movement in the former Spanish colony, had in March recalled its envoy to Madrid after Spain broke with its decades-long stance of neutrality and recognised Morocco’s autonomy plan for the territory.

The Polisario waged a long armed struggle in Western Sahara for independence from Morocco before reaching a ceasefire in 1991, on the promise of a referendum on self-determination.

But the Polisario in 2020 declared the 1991 ceasefire null and void after Morocco sent in troops to forcibly reopen a highway running through Western Sahara to neighbouring Mauritania.

“The return of the Algerian ambassador in Madrid will be determined sovereignly by the Algerian authorities in the context of prior and frank clarifications,” Algiers’ special envoy on the Western Sahara said.

Amar Belani added that it is necessary to “rebuild seriously damaged trust on the basis of clear, predictable principles that comply with international law”, in remarks reported by state news agency APS.

This comes after televised remarks by Spanish Prime Minister Pedro Sánchez in which he said he hoped to “resolve this diplomatic problem in a short period of time”.

He added that he hoped his country could maintain “positive, strategic ties with Morocco and Algeria”, according to local media.

But Belani dismissed Sanchez’s remarks as betraying a “disconcerting lightness” and seeking to “absolve himself of the heavy personal responsibility” over Spain’s about-face.