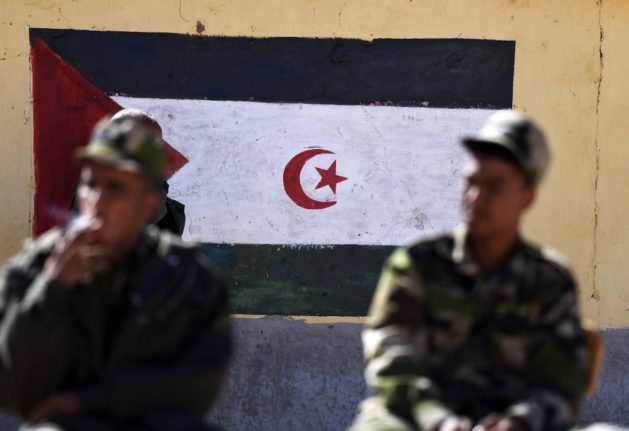 Security men sit in front of a mural with the Western Sahara flag at at the Smara refugee camp in Algeria's Tindouf province, home to several thousands Sahawari refugees. Sanchez's decision to back Moroccohas sparked a backlash within his coalition government. Photo: Farouk Batiche/AFP

At this stage, there are no real guarantees he’ll get anything in return.

In publicly backing Morocco’s autonomy plan for Western Sahara, Madrid has ended its decades-long stance of neutrality, giving in to years of pressure from Rabat in order to end a major diplomatic crisis.

Ties between Spain and Morocco nose-dived in April 2021 after Madrid allowed Western Sahara’s independence leader Brahim Ghali to be treated at a Spanish hospital for Covid-19.

Ghali’s Polisario Front has long fought for the independence of Western Sahara, a desert region bigger than Britain that was a Spanish colony until 1975.

A month later, more than 10,000 people surged into Spain’s tiny North African enclave of Ceuta as Moroccan border forces looked the other way in what was seen as a punitive gesture.

Morocco hailed Spain’s U-turn, returning its ambassador who had left in May 2021.

Spain said it hoped the shift would ensure “cooperation in managing migrant flows” — a key issue for Madrid.

“Spain knows through experience that when the relationship with Morocco is good, migrant arrivals fall dramatically,” said Eduard Soler, a North Africa expert at the Barcelona Centre for International Affairs. 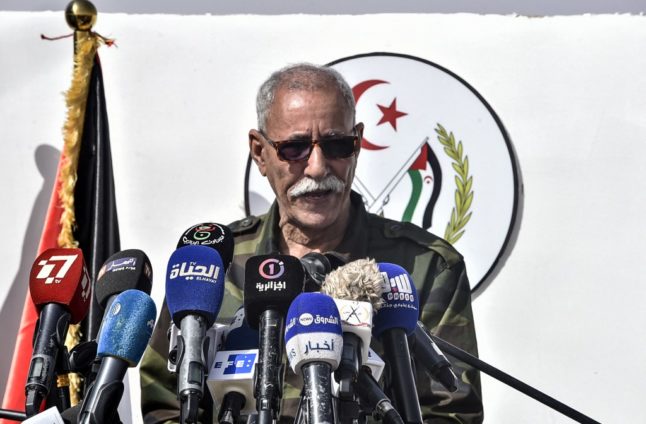 Brahim Ghali, President of the Sahrawi Arab Democratic Republic (SARD) and Secretary-General of the Polisario front, was treated for Covid-19 in Spain. (Photo by RYAD KRAMDI / AFP)

But the “guarantees that Spain might have received about controlling migratory flows will not necessarily last forever”, warned Irene Fernández Molina, an international relations expert at Britain’s Exeter University.

Madrid also said the move would safeguard its “territorial integrity” — a reference to its Ceuta and Melilla enclaves, both claimed by Morocco, which is expected to put its demands on the back burner.

But the timing and the way the Spanish decision came to light via a statement from Morocco’s royal palace — contrary to diplomatic norms — has raised questions.

“It gives the impression that the palace pre-empted (a Spanish announcement) with its own statement, probably on purpose,” said Isaias Barrenada, an international relations expert at Madrid’s Complutense University.

The move infuriated Algeria, which supports the Polisario Front. It immediately recalled its ambassador, triggering another diplomatic crisis whose consequences remain unknown.

Algeria is one of Spain’s main suppliers of gas, which leaves Madrid vulnerable at a time when energy prices are soaring due to Russia’s invasion of Ukraine.

But Enric Bartlett Castella, a professor at Esade business school, said it was “unlikely” Algeria would turn off the tap.

“Given the current price of gas, it is in every producer’s interest to sell. And fulfilling a contract is a guarantee which the seller must be careful to observe” to ensure supplier credibility.

Algeria could however review its partnership with Spain, reserving surplus production for other nations and forcing Madrid to look further away for suppliers, which would be more expensive.

“Algeria is an important partner for Spain. It has provided us with stable gas supplies and will continue to do so,” insisted Spanish Economy Minister Nadia Calvino on Monday. 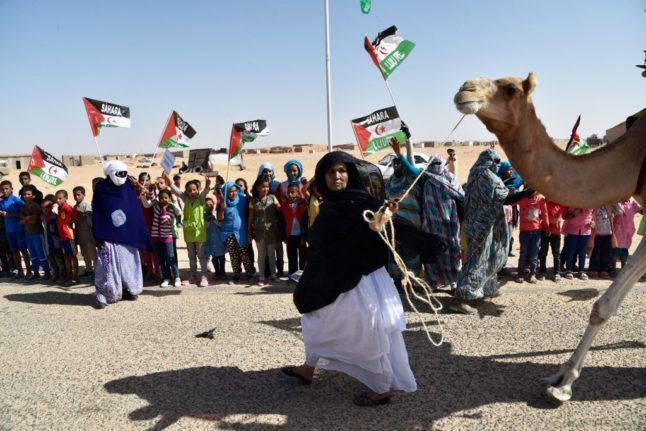 Western Sahara was a Spanish province from 1958 to 1976, at which point it abandoned the territory without transferring its sovereignty over to another country or declaring it independent. (Photo by RYAD KRAMDI / AFP)

“Before, nearly 50 percent of Spain’s gas imports came from Algeria. But in January, Washington outstripped Algiers as the main provider, accounting for 30 percent compared with 28 percent from Algeria,” said Gonzalo Escribano, a researcher at the Elcano Institute think tank.

In Spain, Sánchez’s decision sparked a backlash within his coalition government. The hard-left Podemos — which backs self-determination for Western Sahara — denounced the move as “a serious mistake”.

Such tensions with Podemos come at a difficult moment, with rising social unrest over record inflation and runaway prices.

And the right-wing opposition Popular Party (PP) demanded answers for changing a policy “that has been a matter of consensus” since Spain relinquished its colonial claim on Western Sahara.

“Such a drastic change in foreign policy cannot be decided on by a government, let alone by a party,” railed incoming PP leader Alberto Nunez Feijoo on Saturday.

“It is foolhardy to take the risk of making a U-turn without sufficient support.”