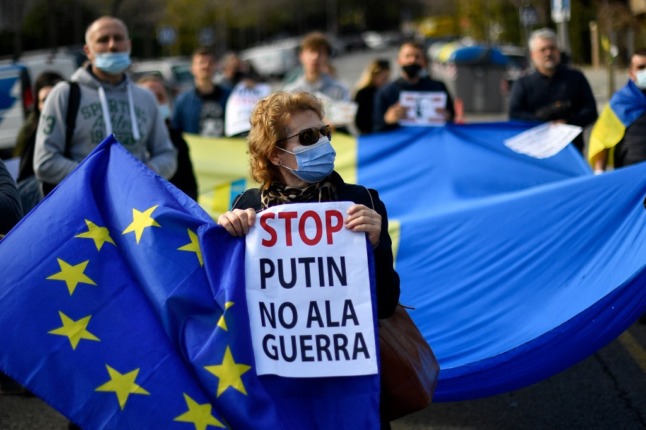 Demonstrators hold placards reading "Stop Putin, no to war" and European Union and Ukrainian flags during a protest against Russia's military operation in Ukraine, in front of the Russian consulate in Barcelona on February 24, 2022. - But would the Spanish government ever concede to the Russian leader due to economic or political pressure? (Photo by Pau BARRENA / AFP)

The economic consequences of Russia’s invasion of Ukraine are already being felt in Spain.

Electricity prices are set to hit a record high in Spain as a result of the conflict (higher than any of the other price spikes experienced over the last year).

Oil prices already surged on Thursday, with Brent breaching $100 a barrel for the first time since 2014, meaning that petrol and diesel prices have already started going up in Spain.

And the import of maize and all sorts of other grain from Ukraine will also be badly hit.

READ MORE: How Spain’s economy could be impacted by Russia’s invasion of Ukraine

These are all economic consequences that are likely to be felt in Spain, Europe and elsewhere around the world as the war unfolds.

As the EU and NATO consider how best to deal with Putin’s invasion, a wide range of sanctions on individuals, banks and companies of Russian origin are being rolled out by different nations.

The Russian leader living up more than ever to his reputation as a dictator will likely seek to wield pressure over many of his opponents, finding each one’s Achilles heel to turn the tables in his favour.

Russia will be able to put pressure on Germany through its dependence on natural gas, in the United Kingdom it may threaten to unveil the full extent of Russian influence and financing over the ruling Conservatives, but what pressure could Putin put on Spain specifically?

As Spain’s economy is highly dependent on tourism, it would be no surprise if Russia targeted this sector if it wanted to get Pedro Sánchez’s government to yield in any respect.

A total of 1.3 million Russian tourists visited Spain in 2019.

Obviously in 2020 and 2021 these figures were vastly reduced due to Covid-19, but even during the first year of the pandemic, the 155,961 Russian tourists who visited Spain spent €201 million.

In 2021, even though visitor numbers were down to 133,961, Russian tourists spent €228 million, consolidating themselves as the second biggest foreign spenders in Spain and the market that was growing the most, even though they’re 11th overall in terms of visitor numbers.

Spanish authorities have been willing to bend Covid travel restrictions for British tourists over the past two years given that they’ve long represented their largest tourist group by sheer numbers, but it’s unlikely that Spain would go against EU sanctions on Russia if the Eastern powerhouse were to threaten Spanish tourism heads with dissuading Russian holidaymakers.

What Spain will want to avoid is the war in Ukraine preventing or discouraging all other international tourists from reaching its shores.

Russia’s billionaire investors have so far not had Spain among their main priorities.

It’s worth noting that Spain’s National Securities Market Commission (CNMV) does not break down all the shares in listed companies that do not exceed 3 percent of the company’s share value and there may be more large Russian investors who remain unknown as a result.

But 2018 data from Spain’s Ministry of Foreign Affairs show that Russia ranked 41st among the largest investors in Spain, with just over €470 million.

With regard to real estate, Russians have made a name for themselves in recent years for being the main luxury property buyers in Spain along with Chinese nationals. 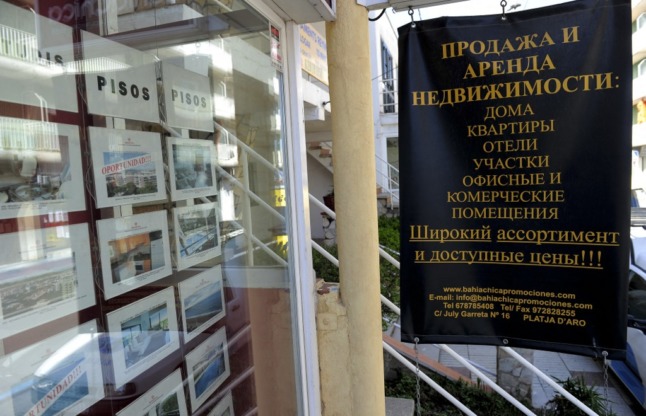 Property ads written in Russian are displayed on the window of a real estate agency in Catalonia. Russians have been snapping up luxury villas surrounded for over a decade. (Photo by JOSEP LAGO / AFP)

Thousands of Russian millionaires have bought second homes in exclusive neighbourhoods in coastal locations across Spain, with the purchase of a €500,000+ property giving them Spanish residency through the so-called golden visa.

Their spending power is huge and Spain’s luxury property market is buoyant in part thanks to them, but the ‘takeover’ is nowhere near as rampant as it has been in London in recent years.

In terms of oligarchs, the most notable Russian tycoon operating in Spain is Mikhail Fridman, who in 2019 took control of the Día supermarket group after a business battle that reached Spain’s National Court.

Unlike the case for other far-right politicians across Europe such as Marine Le Pen, Nigel Farage or Matteo Salvini, there is no evidence that Spain’s Vox party has received financing from the Kremlin in return for championing Putin’s Russia and creating divisions in Spain and Europe.

In fact, Vox leader Santiago Abascal has condemned the “brutal attack” on Ukraine and argued that the Spanish government are “the political partners of allies” of Russian President Vladimir Putin (how he reached that conclusion is unclear). 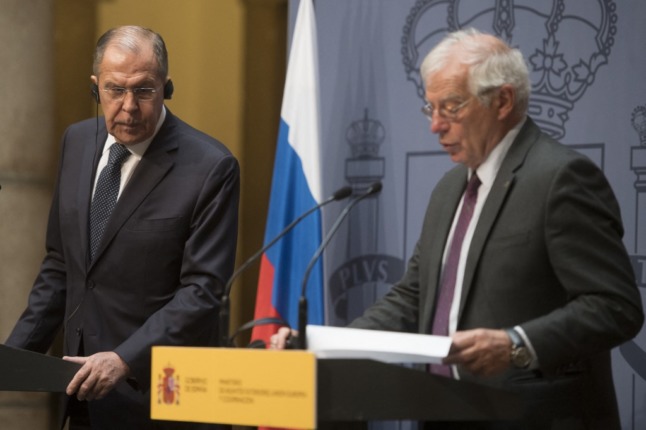 Former Spanish Foreign Minister Josep Borrell and his Russian counterpart Sergei Lavrov (L) hold a press conference at the Spanish foreign ministry in Madrid in 2018. Putin and Sánchez have never met each other during an official visit. (Photo by CURTO DE LA TORRE / AFP)

What has been widely reported previously in leading Spanish newspapers such as El País or think tanks like the Elcano Institute is that Russia did interfere in Catalonia’s illegal independence referendum in 2017.

An investigation by The New York Times also revealed the links between the Kremlin and the office of the now exiled former Catalan leader Carles Puigdemont, one side seeking to destabilise the EU, the other looking for influence to ensure independence went ahead.

In 2019, Spain’s National Intelligence Agency warned that Russian spies continued to operate “aggressively” in the country and that their “hostile operations” were a threat to national security.

Will Spain ever bow to Russia?

Spain will continue to feel the economic repercussions of Russia’s invasion of Ukraine for at least the short term, with the drop in travel affecting its all-important tourism industry, and energy and food supplies all likely to continue rising in price.

But the eastern hegemon does not exert enough commercial or political influence over Spain for Pedro Sánchez’s administrations to ever consider making concessions for Putin if that meant going against the EU or NATO’s strategy.

Spain is a medium-sized player in this conflict, and although any retaliation by Russia on the West will be felt here as well, Putin is unlikely to ever target Spain specifically.