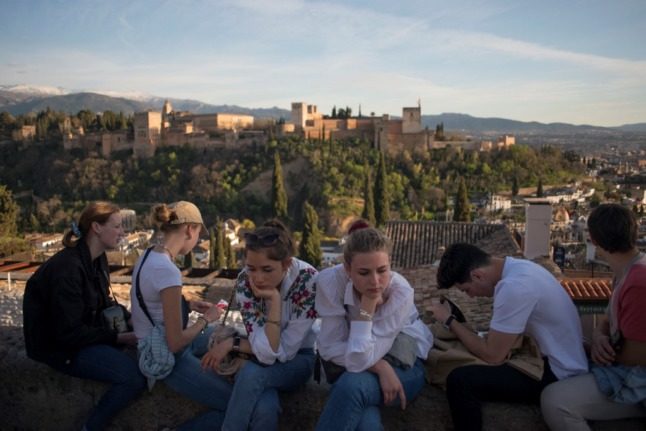 Teenage tourists in Spain with Granada's Alhambra in the background. Spain's Foreign Affairs Ministry has informed The Local that the new rules for unvaccinated minors applies not just to those from the UK. (Photo by JORGE GUERRERO / AFP)

On Friday February 11th, the Spanish government published a state bulletin (BOE) in which it explained that the non-essential travel rules for third country nationals were changing,  specifically for 12 to 17-year-old travellers who haven’t been vaccinated for Covid-19.

From Monday February 14th, “people aged 12 or older but under 18 who show a negative NAAT test (PCR or similar) taken within 72 hours before arrival in Spain” will be included as one of the exemptions for non-essential travel such as tourism from outside of the EU.

The BOE does not mention British 12 to 17 year olds specifically, but instead refers to exemption “K” of the Spanish Health Ministry’s guidelines for third countries, in which UK nationals were mentioned until midday on Friday, when this was quickly changed to refer to non-EU teenage travellers.

This confusing situation has led to different interpretations of the new rule in the Spanish press, with some suggesting the exemption applies to all non-EU/EEA teens and others just British 12 to 18 year olds.

The Local Spain has contacted Spain’s Foreign Affairs Ministry to seek clarification and an Exteriores representative has confirmed that the new legislation applies to all unvaccinated non-EU/Schengen teens, not just UK 12 to 18 year olds.

Over the past weeks, regional governments and tourism groups have been pushing primarily for the rule to be lifted for UK teenagers, as thousands of cancellations by British families whose children were not yet fully vaccinated against Covid-19 were having a major impact on Spain’s main tourism market.

Spain has previously been willing to give UK travellers preferential treatment over all other non-EU holidaymakers so this, coupled with the vague wording of Spain’s state bulletin, explains why there’s been so much confusion.

“The (Covid-19) vaccination of children under 18 has been relatively recent in many countries, without being possible in some cases to complete the full vaccination,” reads the bulletin.

“This situation is resulting in parents who are fully vaccinated not being able to travel to Spain with their children,” Spain’s Tourism Ministry acknowledged.

Therefore, British as well as American, Canadian, Indian, or any other non-EU holidaymakers will be able to travel to Spain with their unvaccinated children as long as they show a negative PCR test.

The rule that still remains in place is that all adult non-EU/Schengen nationals who don’t reside in Spain must be fully vaccinated to visit Spain for non-essential reasons such as tourism.

There are only a handful of non-EU/EEA countries that are exempt from this rule given their favourable epidemiological situation.

Children under the age of 12 will also continue to be exempt from Spain’s vaccination and testing rules for travel.