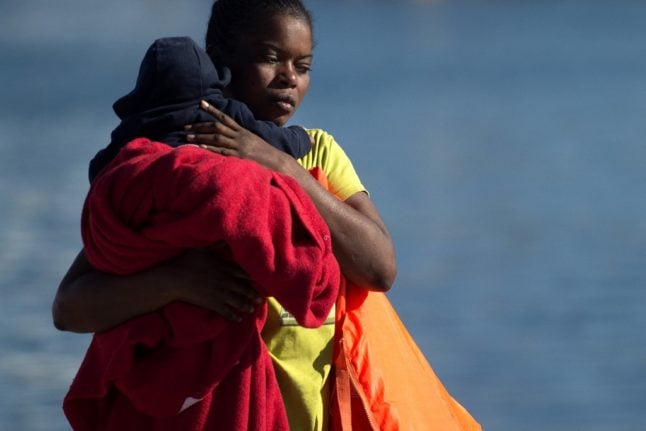 She was brought to Arguineguin port on Gran Canaria island last Tuesday after Spain’s Salvamento Maritimo coastguard rescued a boat carrying 52 people, among them her mother and older sister, who had spent days at sea surviving on seawater.

All but dead, two Red Cross medics worked furiously to revive the toddler on the harbour floor, their desperate rescue efforts ultimately successful in a series of poignant images that made headlines in Spain and beyond.

Still in critical condition suffering from severe hypothermia, she spent five days in intensive care at one of the island’s hospitals, but died on Sunday.

She was the 19th person known to have died this year while attempting the treacherous sea voyage from the coast of Africa, a route which is attracting soaring numbers of migrants.

Angel Victor Torres, the Canaries’ regional head, said her death gave a harrowing glimpse into the plight of those willing to risk life and limb for a better life.

The two-year-old “is the face of the humanitarian tragedy of immigration,” he wrote on Twitter.

“She sought a better life, she was two. Rest in peace.”

Thanking all those who “fought to the end to save her life,” Prime Minister Pedro Sanchez said the death of the girl, whose name is uncertain, was “a wake-up call for everyone.”

“There are no words to describe so much heartache,” he tweeted.

Juan Miguel Vela, one of the two medics who helped resuscitate the toddler at the port, said many of those on board are “in a really bad way”.

“It was a traumatic situation because if she hadn’t responded at that moment, we would have had to leave her and help the others,” he told El Dia local newspaper last week.

“It’s insane you have to reach such an extreme situation to appreciate a reality that we are seeing every single day.”

At its closest, the African coast lies some 100 kilometres (60 miles) away by sea.

But those on board told rescuers they had come from Dakhla, a port in Western Sahara some 450 kilometres to the south, and had been at sea for four or five days, local media reported.

The Atlantic route is notoriously dangerous due to extremely strong currents, with vessels typically overcrowded and in very poor condition, with 1,851 people dying en route in 2020, according to Caminando Fronteras which monitors migrant flows.

“Although it’s the route with the highest mortality rate, it is becoming increasingly busy: people are taking the risk because of the increased patrols along the Mediterranean routes,” the NGO says. Rights groups believe the situation is worsening as a direct result of the economic crisis triggered by the pandemic.

“If at first the pandemic slowed migratory flows, it has ultimately spurred the flight effect,” says Spain’s APDHA rights association in a report released Monday called “Human rights on the southern border 2021” .

“Workers in tourism, fishing or other casual jobs have been left without resources and are choosing to cross the Atlantic themselves or helping others cross with their boats.”

The influx has echoes of the so-called “canoe crisis” of 2006 when 30,000 migrants reached the archipelago.

Last year, 23,023 migrants reached the archipelago, a figure eight times higher than in 2019, causing chaos at Arguineguin port where thousands were forced to sleep rough in appalling conditions deplored by rights groups, politicians and legal officials.

To address the crisis, Spain began building encampments to house 7,000 people and also stepped up diplomatic efforts in various African nations to curb the arrivals at source while reviving repatriation efforts in efforts denounced by the APDHA.

“Trying to stop (migrant arrivals) through repression, increased military patrols and criminalisation, as the EU and this government has repeatedly tried to do, is an objective which is doomed to failure,” the NGO said.