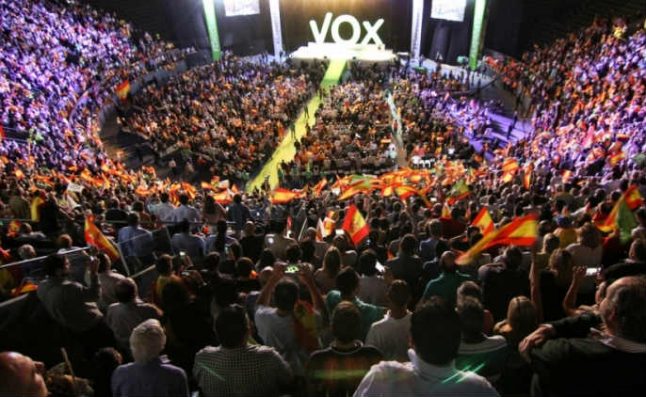 Spain's newest party, that was founded in 2013 and has struggled to gain traction on Spain’s political stage, held the rally at Madrid’s Vistalegre stadium where it claimed to be a sellout with 10,000 attendees and a further 3,000 waiting at the doors.

The Spanish national flag was omnipresent as the crowds listed to speeches from party leaders.

Railing against what he called “the dictatorship of the politically correct” the party outlined a list of 100 proposals, that included revoking the gender violence law, deporting illegal immigrants and outlawing independence movements that threatened to break up Spain.

Party president Santiago Abascal, closed the rally with a rousing speech in which he repeatedly emphasized the word “fascist” – the word used most commonly to criticise the party and its policies – claiming the party would “wear the insults like medals”.

“The living Spain has awoken, thank God. Spain does not rise up randomly. A nation reacts when it has historical inertia, when there is blood coursing through its veins, and when it is aggravated, as Spain is being aggravated now.”

Squaring up to the criticism the party has received from across the political spectrum, he said: “I don’t care if they’re progressives or communists, the cowardly right, or the fickle orange [a reference to Ciudadanos] – Abascal warned that “we will wear the insults like medals on our chest.”

“We did not come here to win with Spain. We came here for Spain to win with us!” he concluded to rapturous applause. “Vox lives so that Spain may live. ¡Viva España!”

A poll by Spain's national statistics office (INE) indicates that only 1 percent of voters would cast ballots for VOX if elections were held now, just below the 1.5 percent needed to secure a seat in Congress.