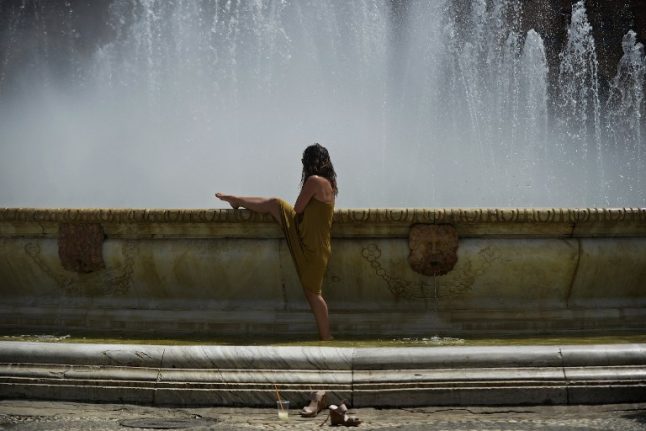 A woman cools down in a fountain in Seville. Photo: AFP

A 78-year-old pensioner was taken ill while working on his allotment on Thursday as temperatures soared over 40C. He collapsed in the heat, was taken to hospital by ambulance but died on arrival.

It was the second recorded death due to heatstroke this week. On Wednesday, a construction worker died in hospital, a day after after collapsing in the heat while working on motorway maintenance in Reguerón, also in Murcia.

The heatwave is expected to continue into the weekend with meteorological experts warning that peak temperatures could reach as high as the mid 40s, even in Spain’s northwestern corner of Galicia.

On Friday, 39 provinces across Spain were issued with weather warnings for the heat, four of them – Badajoz, Cáceres, Ourense y Pontevedra – were on the highest red alert.

Temperatures were predicted to exceed 35C across Spain, apart from along the Cantabrian coast and stretches of eastern Spain along the Mediterranean between Valencia and Tarragona.

Western Spain, from the southern coast of Andalusia stretching north the rough Extremadura to Galicia would see the worst of the heat with temperatures between 40 and 40C.