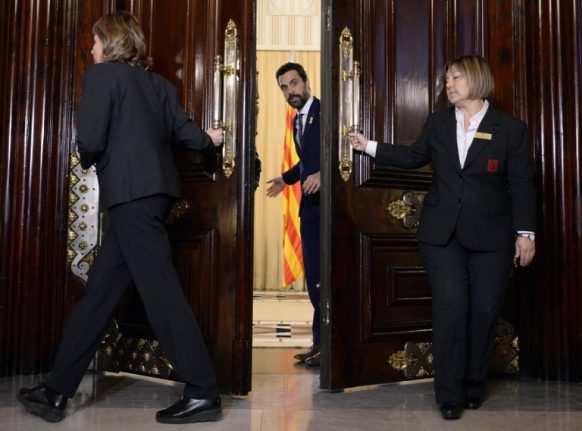 The central government in Madrid has already warned it will take the matter to court and keep direct control over Catalonia if Puigdemont tries to govern from Belgium, where he and other ousted regional ministers fled after declaring independence from Spain in October.

But Puigdemont himself insists he has the legitimate mandate of the people to rule after his Together for Catalonia list won the most votes within the separatist block in December elections.

On Wednesday, the region's separatists took a first step in that direction when they regained control of the Catalan parliament.

The assembly had been dissolved on October 27th by Prime Minister Mariano Rajoy in response to the breakaway attempt.

Fresh from a victory in December elections that gave them an absolute majority, separatist lawmakers elected Roger Torrent of the left-wing, pro-independence ERC party as speaker. Might Puigdemont attempt to govern from exile? Photo: AFP

Their next aim is to regain control of the government by voting for Puigdemont as their president in a parliamentary session due by the end of the month.

Torrent, 38, is holding talks with all the different assembly groups to designate the candidate with most support.

He met Thursday with the Socialists, who oppose independence, and Catalunya en Comu, the Catalan allies of far-left party Podemos, who are also against Puigdemont as candidate.

Torrent has until January 31st to officially propose a candidate — presumably Puigdemont given the separatists are in the majority — but his task is complex.

Puigdemont is in Brussels in self-imposed exile after escaping just days after the regional parliament declared independence.

He risks arrest on charges of rebellion, sedition and misuse of public funds for his role in the failed independence bid if he comes back to Spain.

He wants to present his candidacy and government programme to parliament — a prerequisite to being voted in — remotely via videolink or by having someone else read it for him.

The Catalan parliament's legal experts, however, say the contender has to be physically present and Madrid has vowed to block him.

After meeting with Torrent, Miquel Iceta, the Socialists' leader in Catalonia, said his party could not “fathom the possibility” of a presidential candidate not being physically present.

But the final say lies with Torrent and his deputies who will ultimately decide whether or not to allow it.

“I don't intend to renounce my political convictions but democratic principles and living together in harmony must take precedence,” he told Catalan radio on Thursday.

Last week, Torrent hinted that he would follow what the parliament's legal experts said.

His ERC party has said it will support Puigdemont as president, but has eluded questions over electing him remotely and has asked his Together for Catalonia movement to be “realistic.”

Madrid, meanwhile, has warned it will take the matter to the Constitutional Court if Puigdemont is elected.

READ ALSO: Tabarnia – the 'region' that wants to leave Catalonia