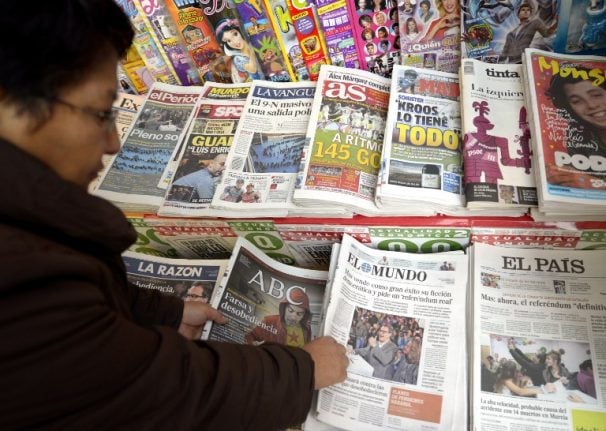 This week sees the last publication of Interviú at the newsstands. Photo: AFP

Communications group Zeta, which had a turnover of €178 million in 2016, said it would also cease publishing political magazine Tiempo.

Both titles made significant losses in recent years “due to a dramatic decline in circulation and advertising revenue”, according to a statement.

The group said it would concentrate on the digital transition of the titles.

Interviu, known for its nude photos of women and shock reports, was launched in the spring of 1976, six months after Franco's death when the country was in turmoil after 36 years of dictatorship.

“Shameless and transgressive, subscribed to scandal, the magazine had been a nuisance to those in power, which had earned it some trouble with the law,” the Catalan newspaper El Periodico, also owned by Zeta, said last year.

“During the Christmas of 1976, a tribunal banned its distribution over a report about the accounts of the Franco family.”

Interviu regularly splashed pictures of half-naked women on its cover — including the wealthy Duchess of Alba — as well as exclusives on significant stories such as the “stolen babies” scandal that shook Spain when it
eventually came to light in 2010.

In 1981 investigative journalist Xavier Vinader was imprisoned after publishing reports on the fight launched by extreme rightwing groups against independence of the Basque country.

His articles were followed by the assassination of two people quoted in the article, leading to Vinader's conviction for “recklessness”, however he was later pardoned.

Interviu had an average circulation of 33,494 copies in 2016, while some of its most popular editions reached one million copies.

But the losses of both magazines in recent years had risen to seven million euros, according to Zeta's statement.

The closures will lead to the dismissal of 24 employees and numerous collaborators, according to the Madrid Press Association.