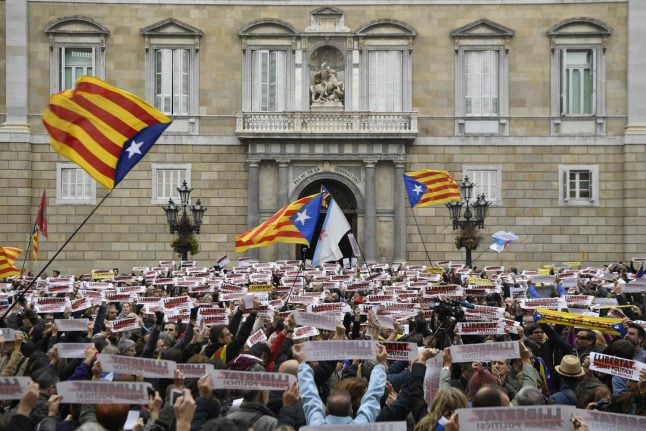 Separatists have called on supporters to match the annual turn-out of Catalonia's national day, when hundreds of thousands gather in the city. The demonstration is due to take place from 5pm.

Forcadell, the sacked speaker of Catalonia's parliament, left a prison near Madrid on Friday hours after supporters posted her bail of 150,000 euros, ending her brief detention.

A judge at the Supreme Court in Madrid on Thursday had ordered Forcadell to be held on charges of “rebellion” — which carries a maximum jail term of 30 years — as Spain's worst political crisis in a generation rumbles on.

She was one of several dismissed Catalan officials to be detained after their shock decision last month to declare the region of 7.5 million people independent from Spain.

Forcadell appeared at the Supreme Court in Madrid on Thursday along with five former Catalan lawmakers.

The others were given a temporary reprieve by the judge, who said they must pay 25,000 euros each within a week or be detained.

Acting judge Pablo Llarena said his decision to grant bail was made after they either “renounced all future political activity” or agreed to respect the law, according to a court document.

The Catalan crisis has caused shock waves across the European Union, prompting nearly 2,400 businesses to move their legal headquarters and re-register outside of the wealthy northeastern region.

Lawmakers opted to split from Spain, claiming they had a mandate after a referendum on October 1st in which 90 percent of voters backed secession.

But less than half of the electorate took part in a vote denounced as illegitimate by Madrid, and Catalans themselves remain deeply split over whether their region should break away from the eurozone's fourth-largest economy.

After the declaration, Madrid dismissed Catalonia's government, dissolved parliament, suspended the region's autonomy and called new elections for the region next month.

Deposed Catalan leader Carles Puigdemont, who fled to Belgium where he is facing extradition back to Spain, has criticised the EU for backing Spanish Prime Minister Mariano Rajoy in the crisis.

Puigdemont and four former Catalan ministers are due to appear before a Belgian judge next week over the extradition warrant.

Eight members of his former cabinet were detained last week on charges of sedition, rebellion and misuse of public funds for their role in the independence push.

Protesters blocked roads and train lines across Catalonia on Wednesday, provoking commuter anger in a strike called by a pro-independence union over the arrests.

Puigdemont, a 54-year-old former journalist, says he will not get a fair trial in Madrid, and has called on authorities to release Catalan “political prisoners”.

Puigdemont and Forcadell have lodged complaints against Madrid with the Strasbourg-based European Court of Human Rights, it emerged Friday.

A court spokesman said four Catalan motions had been filed last month by the two Catalan leaders as well as dozens of Catalan parliamentarians.

The court has yet to decide whether to handle the cases.

Forcadell, a lifelong advocate of Catalan independence, has said that as parliamentary speaker she did not have the power to stop the October 27th vote in which lawmakers backed a break from Madrid.

Rajoy has urged voters to turn out en masse for the December 21st elections in Catalonia, a region that accounts for a fifth of Spain's GDP.

Spain said Friday it had noted news manipulation about the Catalan crisis on social media originating “from Russian territory”, adding the issue would be raised at an upcoming EU ministers meeting.