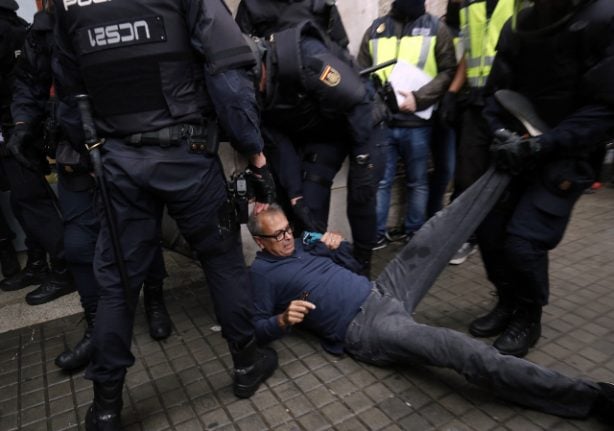 Police clear the entrance to a polling station in Barcelona on October 1st. Photo: Pau Barrena/AFP

The organization carried out on-site investigations after receiving allegations of unjustified use of force by police during the Catalan plebiscite deemed unconstitutional by Spain's courts. It came to the conclusion that police engaged in “excessive force when confronting demonstrators, […] using batons to hit non-threatening protesters and causing multiple injuries”.

The investigations were able to verify excessive use of force in three of the locations it reviewed.

“I travelled to various places and focused on three documented locations where I could verify existing footage against medical records, speak to the people who were hit, visit the site myself, and make sure I was satisfied the thing I saw on social media was real,” he explained.

Excessive use of force by either the Guardia Civil or National Police against peaceful demonstrators was documented by Human Rights Watch at a primary school in Girona, in the hillside village of Aiguaviva in Girona province, and the village of Fonollosa in Barcelona province.

According to the regional Catalan Health Department, an estimated 893 people reported injuries to authorities, while Spain’s Ministry of the Interior said 19 national police officers and 14 Civil Guards required medical assistance. Those numbers have been disputed by the media as well as by social media users on both sides of the divide, who argue that the figures are being manipulated. Raj said Human Rights Watch did not take a position on the figures:

“There are clearly allegations of massaging of numbers in terms of people injured by police, and also counter accusations that the Ministry of the Interior has massaged the number of police injured by protesters. That’s a political question; the question we try to answer is, regardless of the numbers, did a human rights violation occur on that given day? The answer to that is yes”.

Human Rights Watch was able to corroborate through footage and evidence that in Girona for example, national police officers struck people with batons and bruised them after gaining access to a school used as a polling station. In Aiguaviva, video and images showed a national police officer “using a canister of irritant spray” around villagers outside a polling station “when they presented no imminent danger”.

Another incident mentioned in the report took place in Fonollosa, where 70-year-old Magdalena Clarena told Human Rights Watch she was “picked up and thrown to the ground by two Civil Guards” after refusing to move from a chair blocking the path to a polling station. “Video footage shows Clarena being thrown on the ground and Jordi Puig de Llivol, a 31-year-old auto-service technician, being thrown on top of her,” Human Rights Watch noted.

A 42-year-old man also reported being picked up by four guards, moved, then dropped to the ground; forcibly restrained; punched and kicked in the head “even though he was not blocking their entrance to the hall”. Human Rights Watch said it saw the injuries and footage from multiple angles, as well as medical reports that corroborate the accounts.

Raj stressed that he went to significant lengths to verify excessive use of force seen in video footage.

“I think it’s worth noting that because so much information consumed these days is just reproduced, I made an effort to find the source material, speak to the person who recorded it, speak to the person who was hit, see their medical reports, read the legal complaint sent to the police and put together all of the data rather than just say ‘I saw the video, it was a bad thing’.”

“[The investigations involved] trying to identify the person in the video, meeting them, making sure they're the same person, asking for their medical reports, and looking at the scars they have or bruises. It takes some hours in each case and if you want to document an instance in which 11 or 12 people were ill-treated it can take a day,” he continued.

Asked whether there was any sign of police being provoked in the three incidents where excessive use of force was verified, he replied:

“In the three instances we documented the people who were demonstrating or protesting offered no imminent threat or danger to the police, and were resisting peacefully. We have seen footage of attacks against the police in other instances we weren’t able to verify. I contacted the Ministry of the Interior several times to try to get information from them and haven’t had a response”.

Human Rights Watch highlighted the Spanish government’s obligation to ensure an effective investigation into allegations of excessive use of force is carried out, and added that political tensions mean Spain should consider asking for assistance from an international expert body.

“We have to let the existing mechanisms available in Spain for examining complaints against the police have a fair shot, but given how politicized and polarized the atmosphere is at the moment, it would help if an international organization of some kind took an interest in the process to ensure both sides were playing ball and cooperating fully,” Raj concluded.

The full Human Rights Watch report into police force on October 1st can be read here.