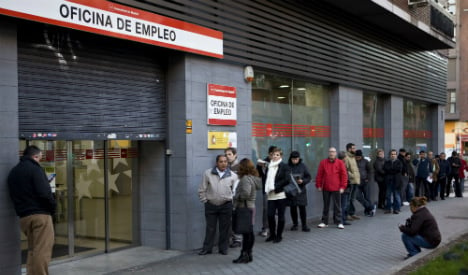 Young and unemployed, Elena Martin sums up how difficult it has become to find a stable job in Spain, an issue that has made its way to the centre of sometimes acrimonious debate ahead of June 26th elections – the second in six months.

After seven years of economic crisis, the country returned to growth in 2014 and has seen its jobless queue shorten, with unemployment now standing at 20.1 percent from a peak of 26.9 percent in early 2013.

But that is still the second highest level in the 28-nation European Union after Greece.

And when acting Prime Minister Mariano Rajoy vaunts his government's creation of 500,000 jobs a year as part of his re-election bid, his opponents retort that Spain is marred by “widespread precarity”, “junk contracts” and “poor workers”.

According to the country's labour ministry, 90 percent of contracts that have been signed since the beginning of the year have been temporary.

And even acting Economy Minister Luis de Guindos has spoken of the “scourge” of temporary contracts.

“This makes sense at the beginning of a period of recovery as companies don't really know what to expect,” says Torres, but he adds that the general instability of jobs is causing a structural problem in Spain.

Marcel Jansen, economics professor at the Autonomous University of Madrid, says Spain's economy relies increasingly on low-value, low-skilled jobs in sectors such as tourism or telemarketing, which don't pay well.

And crucially, Spanish entrepreneurs are now in the habit of considering that “their workers can be used and discarded like papers napkins,” he says.

The average length of contracts has gone from 79 days in 2006 to 53.4 last year, according to official figures.

Standing outside a job seekers' office in Madrid, Martin says she has highlighted on her CV that she is “completely available”, which she hopes will compensate for her lack of university degree.

But since 2008, the 26-year-old has only managed to get a few fleeting jobs – phone operator, manager of a clothes shop where she was “completely exploited”, waitress and cashier.

And work instability is not only the preserve of those with no degree or few qualifications.

It also affects areas such as public health, with doctors and nurses often recruited part time, sometimes for just one weekend, says Manuel Lago, an economist at Spain's largest trade union, the CCOO.

“Over the past ten years, 161 million work contracts have been signed in a country that counts an average of 14.5 million people in its workforce,” he says.

“That means that people keep entering and leaving companies and changing posts, activity and sectors at a frenetic pace.”

A 2012 labour reform brought in by the conservatives has done little to alleviate the problem, and critics say it has actually worsened it.

The reform has for instance brought in permanent contracts with one-year trial periods for companies with less than 50 employees, at the end of which a worker can be fired without explanation or compensation.

Dwindling salaries are also at the heart of the pre-electoral debate.

“There has been a marked increase in poor workers earning less than €690 a month,” says Torres.

To remedy this, Spain could increase its minimum wage – which stood at €757 a month over 12 months in 2015 – by 10 percent over three years without harming competitiveness or job creation, the ILO said in January.