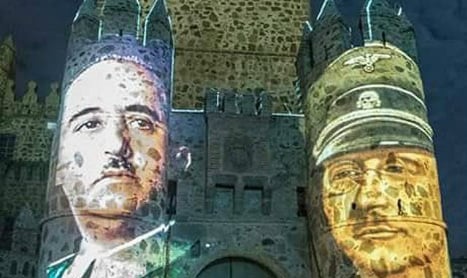 The town of Guadamur in Castilla-La Mancha has come under fire after projecting images of the Spanish dictator Francisco Franco and the Nazi commander Heinrich Himmler onto its castle walls as part of a local festival in homage to the town’s Visigoth past.

The projection was supposed to illustrate the negotiations of the provisional Vichy government for the recuperation of the treasure of Guarrazar, a local archeological discovery of Visigothic crowns and gold crosses – half of which ended up in France.

During the Second World War Francisco Franco negotiated with Marshal Pétain for the return of the treasures to Spain, which was what the projection was meant to depict.

Watch a video clip of the sound and light show here:

But locals questioned the appropriateness of the images, which some thought were a way of honoring the two men.

“It was never the intention of the organizers, the documentary maker or collaborators to praise the people… or the actions of their governments,” the town hall said in a statement.

“The town hall of Guadamur would like to apologize to those who were offended by any of the images shown,” the statement continued.

The provincial government of Toledo distanced itself from the event.

“The government of the region of Toledo does not support any kind of public spectacle that includes content that does not fit in with our democratic and constitutional system,” it said in a statement after Socialist councillor Guadalupe Martin uploaded a photo of the projection to Twitter.

The projection was met with scorn on social media.

The left-wing party Podemos tweeted “Projecting images of criminals like Franco and Himmler is not a crime because they are not puppeteers,” referring to the recent incident in which puppeteers were arrested in Madrid for glorifying terrorism for a satire they staged.

Another Twitter user wrote “Franco and Himmler, heroes of Guadamur”.