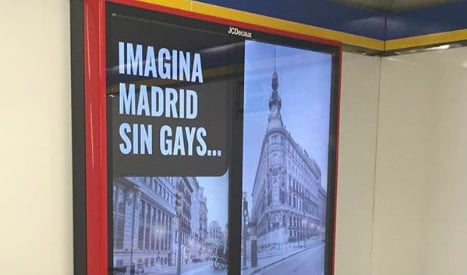 The poster, which features shots of the empty streets of the Spanish capital, features the slogan: “Imagine Madrid without gays”.

It has infuriated people passing by, who assumed it was a homophobic statement; not realizing the poster is actually advertising an LGBT festival in Madrid.

Rather than the “imagine Madrid without gays” (wouldn’t it be great) as many people have inferred the poster is actually trying to say imagine how terrible Madrid would be without its gay population.

The message appears to be a little too subtle, however, and the public have reacted strongly.

“I understand the main goal of the add is to attract attention but this has been done in such an ambiguous way that any homophobic person would feel good about it – 'Let the gays go far away this would be a calmer and nicer city without them,” Rion Blake, who tweeted about the advert, told The Local on Wednesday.

“I think the metro should be more aware of the diversity of its travellers and the fact that it’s providing a service in a cosmopolitan city that prides itself on being diverse and welcoming,” Blake added.

Madrid Metro quickly replied to the criticism, tweeting that “the poster is promoting an LGBT festival”.

It is not the first time Madrid Metro has been embroiled in a homophobia row. In February 2015 the public transport provider came under fire after an internal memo warning staff to keep an eye on “homosexuals, musicians and beggars”.