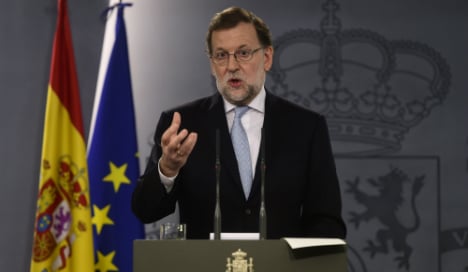 While it won December 20th legislative polls, Rajoy's conservative Popular Party lost its absolute majority, leaving it in the unprecedented situation of having to garner support from other parties to form a minority government.

“We think that the wish of the Spaniards over whom should govern is clear, we think there is a mandate, and therefore I… will try to form a government,” Rajoy told reporters in his end-of-year press briefing.

He gave scant details as to what a minority PP government would look like, but said it should among other tasks strive for national unity in the face of a separatist movement in the northeastern region of Catalonia – a hot-button issue which all main parties agree on.

But the 60-year-old premier – whose drastic spending cuts over the past four years helped ease Spain away from economic collapse but created inequalities and precarity – has his work cut out.

So far both the PP's traditional Socialist rivals (PSOE), who came second in the elections, and upstart party Podemos which arrived in third place with a surprisingly high 69 parliamentary seats, have refused to support him.

Rajoy has met the leaders of both parties, as well as Albert Rivera, head of new centre-right grouping Ciudadanos, which came fourth in the elections with 40 seats.

He faces a vote of confidence in January on whether he can stay on as leader of the government.

In a first vote he needs to get the backing of more than half of 350 lawmakers in the assembly.

If he falls short a second vote will be held 48 hours later with a lower bar to success – he would just need to get more votes for than against him.

That means that if Ciudadanos and the Socialists were to abstain from voting in the second vote, Rajoy would be able to get re-elected.

Ciudadanos, which shares many of the PP's economic policies, has said it will abstain.

That leaves Rajoy courting the Socialists for their backing.

But in a separate press conference Tuesday, the PSOE once again rejected any form of support.

“We will vote no to Rajoy and to the PP because they represent immobilism,” said PSOE number two Cesar Luena.