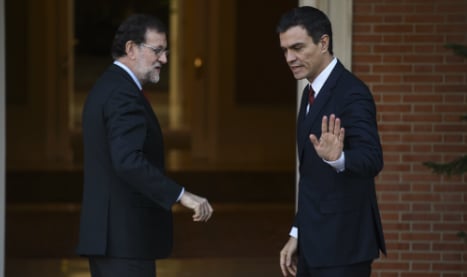 “We were clear: we will vote against the continuity of the Popular Party at the helm of the government, with Mariano Rajoy as prime minister,” Pedro Sanchez told a news conference after holding talks with Rajoy for the first time since Sunday's election.

With the Popular Party winning only 123 seats – far short of the 176 it needs for an absolute majority – it is seeking to form a minority government.

To do so it needs the Socialist PSOE, which came in second with 90 seats, to support it during a vote of confidence in parliament.

If the Popular Party fails to form a government, Sanchez said the Socialists would “explore all options for there to be a government of change”.

With left-wing parties holding the balance of power in the new parliament, the Socialists could form a government by joining forces with anti-austerity Podemos and other smaller nationalist forces.

That outcome would mirror events in neighbouring Portugal where the ruling conservatives won an October election but fell to a Socialist government backed by leftist parties just days later.

Under Spanish law, the new parliament must be called by January 13th, after which lawmakers have two months to elect a government. If they fail, the acting prime minister has to call a new election.

Sanchez said holding fresh elections should be the “last option” to overcome the impasse.

Meanwhile Ciudadanos have called for dialogue with the PP and the Socialists with a view to striking “a pact for Spain”.

“We propose a pact for Spain to the Popular Party and the Socialists so that nobody takes advantage of weakness, uncertainty and instability to break up the country,” said Albert Rivera at a press conference on Wednesday in a reference to a strong secessionist drive in Catalonia.

He has been invited to meet with Rajoy to the presidential palce in Moncloa on Monday as has Pablo Iglesias, leader of Podemos.