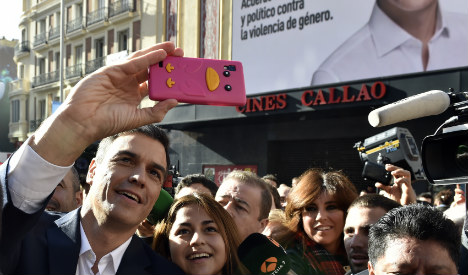 The poll conducted by DYM for the digital newspaper El Confidencial places the ruling PP in the lead with 26.7 percent of the vote, a slight drop from the 27 percent notched up a month ago.

It not only shows that Ciudadanos, the centrist party of Albert Rivera, have been steadily gathering support, but that Podemos, the radical anti-austerity party of Pablo Iglesias had now overtaken the PSOE in popularity.

The survey was conducted during the day before and the day after a televised debate between Socialist leader Pedro Sánchez, Rivera and Iglesias and the deputy prime minister Soraya Sáenz de Santamaria. The party leaders and deputy PM at the debate on Monday.

Prime Minister Rajoy had refused to participate in the event which saw a record 9.2 million viewers tuning in – Spain’s largest TV audience so far in 2015.

Commentators widely agreed that the pony-tailed leader of Podemos had performed best during the two-hour debate while the socialist Sánchez had failed to impress at all.

A readers' poll in the left-wing daily El Pais gave 47 percent to Iglesias as the most impressive and 24 percent to Sánchez while in conservative-leaning El Mundo the margin was even wider with 42 percent siding with Iglesias and just 7 percent with Sanchez.

Polls consistently show that the ruling conservatives are likely to win the most votes although fall far short of the absolute majority they currently enjoy.

The DYM poll showed that Podemos appeared to be making a comeback ahead of the December 20th general election.

Ciudadanos, a party that was founded in Catalonia by Rivera in 2006 before expanding nationally last year, has been steadily gaining popularity according to polls, overtaking Podemos and challenging PSOE to the second spot.