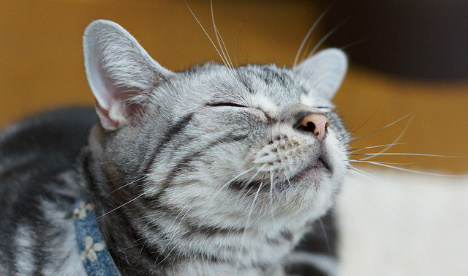 Firemen may be used to rescuing cats trapped high up in trees, but in northern Spain this weekend they were called to help a cat out of a much more dangerous situation.

Firemen rescued the cat from a house fire in the town of Vilagarcía on Saturday, when it became trapped in the smoke-filled house.

Once the firemen had extinguished the fire, they found the cat “convulsing” in a room close to where the blaze broke out.

“It was clear that it was a case of carbon monoxide poisoning that had recently occurred,” one of the firemen told regional newspaper, La Voz de Galicia.

The firemen acted quickly, giving the cat a dose of oxygen therapy and giving the pet a “little cardiac massage”.

The video of the dramatic rescue shows firemen holding the oxygen mask onto the cat's lifeless face, while massaging its heart and brinking it back from the brink of death.

The cat soon springs back to life, letting out a triumphant miaow as it is reunited with its owner, who later took it to the vet to receive the all clear.