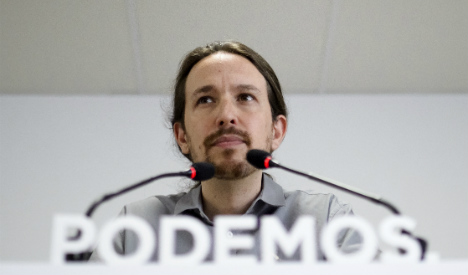 Pablo Iglesias, the pony-tailed academic who leads the party, appeared tired and hesitant on Sunday during a televised debate with Albert Rivera who heads the new centre-right Ciudadanos, adding to the sense that Podemos has lost momentum.

Set up in January 2014 by a group of political science professors who emerged from the “Indignados” movement against economic inequality and corruption, the party surprised pollsters and analysts by winning five seats in the European Parliament elections a few months later.

In a country where almost a quarter of workers are unemployed, a pledge to restore the welfare state helped catapult it to the top of opinion polls in January 2015 with the party seen winning as much as 28 percent of the vote.

But a poll published earlier this month showed its star appears to have waned with Podemos slumping to the fourth place with 14.1 percent support, behind the main opposition Socialists, the ruling conservative Popular Party and Ciudadanos.

“Podemos had an absolutely disproportionate boom after the European elections,” Jacobo Rivero, the author of two books on Podemos, told AFP.

This “wave of success” hid a growing “disconnect with its base” due in part to its reluctance to merge with other leftwing parties, he added.

“Combined with an overexposure in the media, this has worn them out,” said Rivero.

The fact that Podemos' close ally, Greece's ruling Syriza, has been forced to implement austerity measures it had once railed against has also hurt the party, analysts say.

The first setback was in March when Podemos, which means “We Can”, won just 14.9 percent of the vote in a ballot in the southwestern region of Andalucia.

The following month, one of the founder members of Podemos, Juan Carlos Monedero, resigned after it emerged he had done advisory work for leftwing governments in Latin America some years ago and only recently made good tax payments on the work.

Candidates backed by Podemos won power in Madrid and Barcelona and several other cities in nationwide municipal elections in May but their margin of victory was lower than expected, said political analyst Jose Ignacio Torreblanca, who also wrote a book about Podemos.

Podemos hoped a good result in a regional election in the northeastern region of Catalonia last month would catapult it to a strong showing in a December 20th national election.

But the alliance of leftwing groups it joined, Catalonia Si Que Es Pot, scored just nine percent of the vote, sparking the resignation of eight party leaders in Catalonia.

“They have been hit by all sides, had the general election been held in January, without a doubt they would have done well. But every day since then has been uphill,” said Torreblanca, a senior fellow at the European Council on Foreign Relations think-tank.

“I think they have struggled to be something more than simply a party that expresses people's fury,” said Torreblanco.

The appeal of the party's proposals, he said, “is more emotional than rational”. Iglesias, 37, “really was poorly prepared” for the debate, Rivero said.

Irene Montero, a Podemos leader, said the goal had been to show a different side of Iglesias.

“How many times have we heard that Pablo is arrogant, that he did not listen? During this debate we could see a Pablo who is open to dialogue, who can agree with another politician when he thinks they are right,” she said.

“Obviously he is tired! With the rhythm of everything that has happened this year.”

Conservative media and politicians often portray Podemos as dangerous radicals and party members have discussed, at times in public, whether the party should tone down its proposals to capture more centrist voters.

“There is a sense among voters that they change their positions depending on their audience,” said Ivan Gil, the author of a biography of Iglesias.