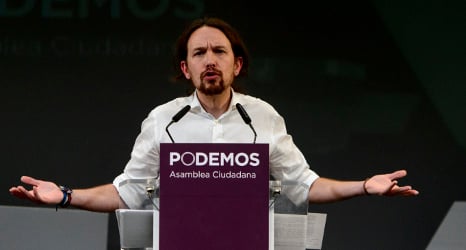 The poll in Spanish national daily El País is the latest to give the anti-austerity party the number one position when it comes to voter intentions for general elections likely to be held at the end of 2015.

The ruling conservative Popular Party, meanwhile, is now a distant third with 19.2 percent, the poll shows.

The results show once again the fragile state of Spain's two-party system with the scandal-hit major parties polling less than 50 percent between them.

However, the El País poll also found that almost half of all the people who said they would vote for Podemos didn't support their policies.

This suggests that much of the backing for the party which rose to prominence when it won five seats at European Union elections in May is a protest vote against the country's traditional parties.

Podemos plans to renegotiate Spain’s debt-paying commitments to mitigate the impact of austerity policies on the population, and also supports a basic living allowance for all citizens as a poverty reduction tool. A Podemos government would halt evictions of mortgage defaulters while pushing for a more equitable European Union.

The party, first formed in early 2014 has been criticized as naive, opportunist and populist by critics but has won widespread report among Spaniards frustrated by the country's long economic crisis, spending cuts to health care and education, and perceived high levels of corruption on the part of Spain's major parties.