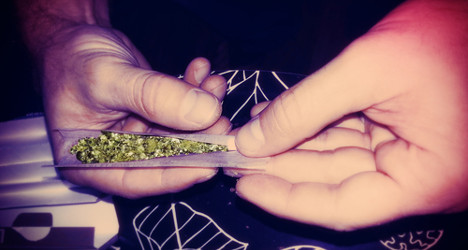 Photo of someone rolling a marijuana joint: Shutterstock

In its statement published on its website, Fedcac said police had not provided information on why members had been arrested.

But Spain's El País newspaper report they were taken in on money laundering charges as authorities continue a crackdown on the Catalan capital's booming 'cannabis club' scene.

These cannabis clubs operate in a legal grey area. In Spain, it is illegal to sell cannabis or smoke it in public but private growing and use are allowed.

This has led to a boom in the number of so-called 'cannabis clubs' in Barcelona. These clubs are supposed to act as cooperatives funnelling all earnings back into the business. They are also supposed to be members-only establishments.

But there has been a flood of tourists to the Catalan capital looking for a ‘legal’ high, and police believe some clubs may actually be making profits.

Authorities have arrested members of Fedcac on possible money laundering charges as they investigate where all the money is going, El País reported.

Fedcac represents a number of groups which are fighting for legalization of the drug in the Spanish region where a large number of cannabis clubs operate in a legal grey zone.

Members of the group regularly meet with local authorities as part of their fight to make the clubs legal.

Barcelona city council announced in June that no new cannabis clubs will be allowed to open in the city for one year in order to halt their proliferation and allow for tighter regulation of the 160 clubs that already exist.

READ ALSO: How Barcelona is getting it wrong on cannabis