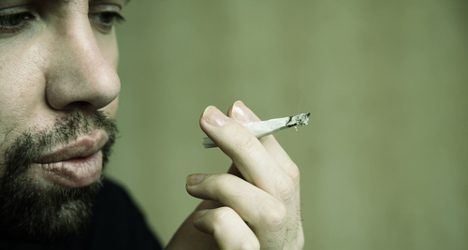 The club in the city's Ciutat Vella district was shut down after police officers spotted a man approaching tourists and taking them to the club to buy drugs.

Later inspections of the premises revealed marijuana packaged for sale, a price list for the drug and a set of scales.

All of this meant the club was breaking the law.

In Spain, it is illegal to traffic cannabis, and smoking in public places could mean a stiff fine. On the other hand, it's legal to grow cannabis for personal use and smoke it in private.

Barcelona's popular cannabis clubs have made use of this legal grey zone and are tolerated by authorities as long as they don't actually operate as a business.

SEE ALSO: How Barcelona is getting it wrong on cannabis

In theory, Barcelona's smoking clubs act as cooperatives where annual membership fees go towards the cultivation of marijuana for the use of club members.

They are not supposed to be hawking for tourists and new members are meant to be referred on by existing members.

In recent times, however, there have been complaints the situation is getting out of hand.

"There are clubs which have clearer rules than others," Jaume Xaus, a spokesperson for CatFAC which represents about 40 smoking clubs in Catalonia told The Local recently.

"In some cases, people are opening big clubs for financial reasons and then buying their marijuana off the black market.

"We are supposed to be producing our own marijuana. And once people start buying to supply their members, you get criminals involved," Xaus said.