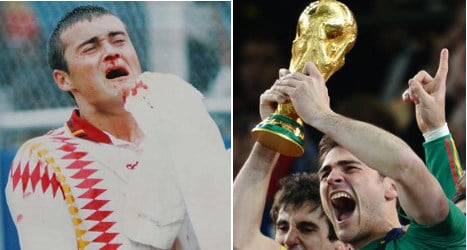 No guts, no glory: Luis Enrique sobs after having his nose broken in 1994, a far cry from the joy of Iker Casillas lifting the trophy in 2010. Photo: YouTube, Jewel Samad/AFP

Remember the time when Spain were recognized as the biggest underachievers on the world football stage?

That ill-fated reputation is now a thing of the past as we know, with the team having won one World Cup and two Euros in just six years.

But a lot happened to ‘La Roja’ before they were crowned the best national side on the planet.

That includes everything from one of their players having his nose broken in the dying seconds of a crucial game to the team chasing a ref off the pitch over two unfairly disallowed goals.