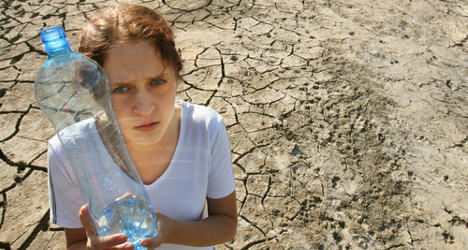 Photo of woman during a drought: Shutterstock

The last eight months have been brutally dry for large swathes of southern and eastern Spain.

While huge storms buffeted Spain's Atlantic coasts and the Canary Islands during the winter and spring, Valencia and Alicante, as well as areas including Murcia, parts of Albacete province, and the Andalusian provinces of Jaén, Almería, Cadíz and Málaga have all been starved of rain.

In the last 150 years, there has never been "such a long and intense drought", according to the country's meteorological agency Aemet.

Indeed there are parts of the country where during "the second worst period of drought on record there was twice as much rain as now", meteorologist José Antonio Maldonado told Spanish free daily 20 minutos.

Rainfall levels in many areas have been less than half of those seen from 1971 to 2000, while some places have seen less than 25 percent of those levels.

Most dams are still at somewhere between 74 percent and 90 percent of capacity thanks to rains from earlier years, but some farmers are already struggling to water their crops, or have gone out of business.

Spain is also facing an uncertain water future: a 2013 study by the Spanish National Research Council (CSIC) looking at the period from 1945 to 2005 found the country's droughts were becoming more intense and more regular.