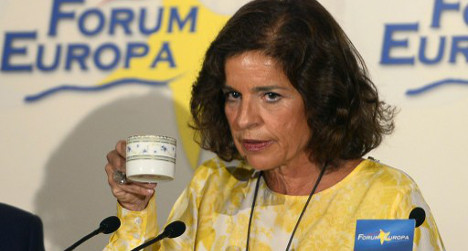 Some analysts are saying that Madrid's failure to win the 2020 Olympics will cost city mayor Ana Botella her job. Photo: Cristina Quicler/AFP

On Thursday, Botella called a press conference and announced Madrid was throwing in the Olympic towel.

After three consecutive failed bids for the summer games — the last coming on Saturday when Madrid lost its fight to host the 2020 Olympics to Tokyo — the city would not try again for 2024.

"I think at this moment the Olympic race has already provided us with all the benefits which we can expect from it in the coming years," Botella told reporters.

But the 59-year-old who studied Law at Madrid's Complutense University also raised plenty of smiles when she asked the gathered media: "I hope you've all been served a café con leche?"

The question was a reference to Botella's now infamous speech before the International Olympics Committee.

In her final effort to sell Madrid to the Games organizers, she spoke with what the Wall Street Journal called "rudimentary English" about the delights of the Spanish capital.

"There is nothing quite like a relaxing cup of café con leche (coffee with milk) in Plaza Mayor", said the mayor of the city ruled by the conservative Popular Party (PP).

Within days, t-shirts bearing the slogan were on sale in Spain and remixed videos of the speech had been posted on YouTube.

But the humorous reaction was balanced out by some more serious criticism.

This is why Botella had converted "our friendship" into "our friend sheep", wrote Sanz.

The linguist also accused Madrid's mayor of being too tense, noting that the frequency of her voice was twice that of the average female speaker.

"How is it that a person whose job is based on pubic communication can get so nervous when speaking in public?" Sanz asked.

But Botella seems to have taken it all in her stride: "I know the Spanish sense of humour and I laugh at myself a lot," she said at Thursday's press conference.

She also received a vote of confidence from one surprising corner — her very own Olympics trainer, US communications coach Terrence Burns.

Burns wrote all of Botella's Olympics bid speeches and even — it emerged on Wednesday — penned the famous café con leche line.

"She (Botella) is a professional. She listens very attentively and does exactly what I tell her she has to do," Burns said to Spain's Vanity Fair of the hundreds of hours he spent coaching the mayor through her speeches.

"She never seemed tired and never told me to stop. In fact, she always said "one more time please" until she could do it perfectly.

"If people didn't like her speech or how she did it, they should blame me and not her," Burns added.

And there has been blame.

"Madrid and Spain have lost the race to the game but Ana Botella thinks she's losing something she never had, a political career," Lara tweeted.

Catalonia's La Vanguardia newspaper has also predicted the end of Botella's hold on the plum Madrid mayor job when city elections next come around in 2015 — should she decide to run again.

On Thursday, the daily noted how the mayor had stepped into the role without a single vote being cast after her former boss Alberto Ruiz-Gallardón became Spain's justice minister.

She arrived in the position with eight years experience as a Madrid city councillor which followed on from a varied career as a civil servant.

But La Vanguardia said things had not gone to plan since her taking of the reins.

Among her failures, the paper noted Botella's management of a deadly accident at Madrid Arena.

In November 2012, five girls died at a Halloween party at the venue after organizers sold too many tickets.

In the aftermath of the incident, Botella appeared to be trying to deflect blame when she said she had borne the brunt of the criticism although others were "chiefly responsible".

A subsequent petition calling on the mayor to resign over the incident garnered 15,000 signatures on change.org.

She has one very important political ally: she is married to former Spanish Prime Minister José María Aznar who remains a key figure in the country's ruling Popular Party.

The two met on an end-of-school trip and married in 1977. They have three children together.

That relationship could certainly help keep Botella in her magnificent Madrid office, which is, according to Germany's Der Spiegel magazine, larger than Washington's Oval Office.