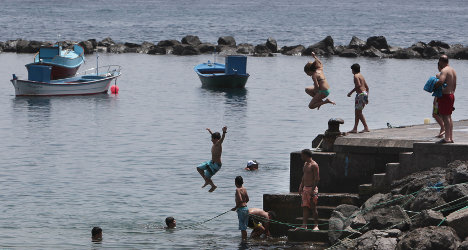 Jose Lazaro's unemployment benefits have run out, but that hasn't stopped his family taking their yearly camping trip. This summer the campsite is letting them stay for free.

It is just one of the ways Spaniards are finding to hang onto their cherished summer holidays despite the recession.

The El Escorial campsite, northwest of Madrid, has joined others across Spain in agreeing to provide a few days in one of its bungalows for unemployed families with children.

"It is wonderful," says Jose's wife Pilar, fresh from an "aqua gym" class in one of the campsite's open-air swimming pools.

If it weren't for this, "we'd have just gone to our parents' village, or stayed at home", she says, holding a list of camp activities she can enjoy for free — pilates and dance classes, plus hockey and basketball for their sons, aged 11 and eight.

Jose, 44, formerly a construction worker, was thrown out of work two years ago. With little cash, he and many like him are making what they can of what is on their doorstep: Spain's campsites, countryside and beaches.

While Spain welcomed 58 million foreign visitors last year, trips abroad by Spaniards have fallen heavily, the tourism ministry says. Nine out of 10 Spaniards took their holidays within Spain last year, according to its latest figures.

Several hours' drive east of Madrid, sunbathers are out tanning on the beach in the sweltering resort town of Benicassim.

Popular with holidaymakers from cities around Spain, the town's population is swelled in late July by thousands of foreigners who come for a big music festival.

That offers young locals like Juan Martorell, 18, a chance to have a mini-break for no charge: he has worked emptying the bins in the festival campsite in return for a pass to concerts by some of his favourite DJs.

"This is a holiday for me," he says. "I am working so that I can go out and party a bit. The tickets are too expensive otherwise."

He is not the only one to prioritize work over leisure in a country where the unemployment rate stands at 26.26 percent.

Holidays are sacred for the Spanish

Javier, 28, came up the coast from Valencia to stay at a friend's apartment in Benicassim and work at one of the festival's information desks.

"Maybe we'll just take the car and go away for a week and sleep on the beach," says Javier, declining to give his second name.

"What I'm not going to do is catch a plane and go for a holiday far away."

While foreigners throng the beachside cafes and restaurants, Spaniards are adjusting their habits.

"We don't go out as much. We have just a sandwich or a meal at home. My mum gets the bus to the beach instead of renting a beachside apartment," says Rocio Agost, 17, sitting with a friend a few metres from the blue Mediterranean waves.

"You have to make an effort to find cheaper options. Holidays are sacred for the Spanish."

In a country with a tradition of owning holiday homes and of visiting relatives in country villages in the summer, Spaniards are saving money by spending less time in hotels.

"We have noticed that they are making shorter stays — three or four days instead of one or two weeks," says Carlos Perez, marketing manager at El Palasiet, a big spa hotel in Benicassim.

Get the latest foreign exchange ranges on The Local's handy currency page.

"We have adapted and offered special rates."

Of the many Spaniards who took holidays in their home country last year, most stayed in friends' or relatives' homes or in properties they owned themselves, the tourism ministry's figures showed.

"Spanish people are going abroad less. Instead they grab the car and go to their parents' village, to get out of the city and relax a bit," says Perez.

The directors of the El Escorial campsite have pushed on with the free camping offer, set to benefit 19 families, even though they say the recession has hit their business.

When their three-night stay there is over, Jose and his family plan to spend a week in his parents' village in rural Extremadura before going home to Madrid.

"In Spain we have lots of options for holidays," says Jose, drinking beer and eating potato crisps on the terrace of the bungalow.

"You grab your bike and your rucksack and there are lots of places to go, for very cheap. And when you go back to your home village, there's a swimming pool and your parents feed you." 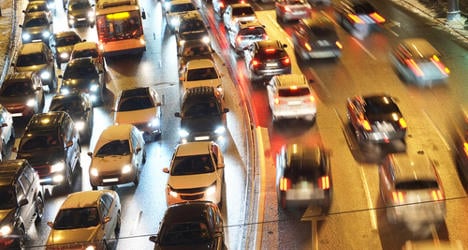