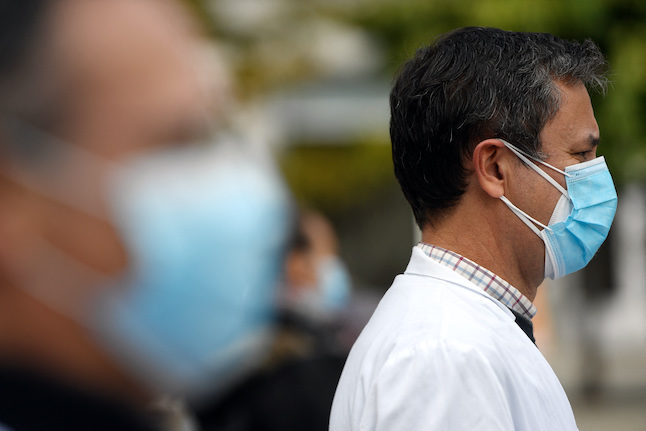 Doctors protest against the mistreatment of the sector, called by the Executive Committee of the State Confederation of Medical Unions (CESM), and demand quality healthcare during a demonstration outside the Spanish Parliament, in Madrid on October 27, 2020, marking the kickoff Doctors strike in eight regions in Spain. Photo: PIERRE-PHILIPPE MARCOU / AFP

In November 2022, some unions across the country called for an indefinite strike due to poor working conditions, however, it was suspended during Christmas until Thursday, January 12th.

Health professionals in most of these regions have scheduled these stoppages for particular dates listed below.

READ ALSO: Why people in Spain are facing longer waits to see a doctor

When are the scheduled strikes and why are they striking?

The Medical Union of Valencia, CESM CV, issued a statement on November 30th to announce that it would strike on January 17th and 18th, however, later they said they would postpone this strike due to the dire situation in which public health finds itself, adding that they did not want to “contribute to the chaos”.

“We will not call it off, but we postpone it,” said Víctor Pedrera, general secretary of the union. They later confirmed that the strike dates would take place on March 6th, April 3rd and May 8th instead.

The call for walkouts came after the union’s last meeting with the Ministry of Health, in which they were promised that the situation would be improved. Ultimately this was not achieved, the union said. According to health professionals in Valencia, “the situation is unsustainable” due to the lack of professionals, the pressure on the health system and the working conditions. “For years we have been denouncing this situation, despite having postponed the demands to prioritise care as a result of the pandemic,” they said.

In the latest meetings with the government, some of their demands were considered, such as the 35-hour day, but no agreement has yet been reached.

In December the Unions of the Primary Care Physicians of Aragón (CESM Aragón and FASAMET) asked the regional government for urgent measures “to alleviate the daily collapse of health centres, the exhaustion of professionals, the overload of consultations and the deterioration in the quality of the services”.

The unions presented the regional government with 25 measures to improve the working situation, which stated that it is “reaching dangerous limits” and that “in the short term, it can only be improved with a better distribution of medical positions and by improving working and pay conditions”.

The unions warned that if their demands were not met, there would be a general health strike on January 23rd and 24th. Talks are continuing, however, and the unions are optimistic about the possibility of it being called off.

READ ALSO: The best private healthcare for foreigners in Spain

The union Metges de Catalunya has called for two days of health strikes on January 25th and 26th for 25,000 physicians who work in the Comprehensive Health System for Public Use (SISCAT).

In a recent statement, the union said they have to “take a step forward” to rectify the “unstoppable downturn” in which the Catalan health system finds itself.

They added that the numerous demands before calling the strike “have not had a decisive and concrete response” from the administration. According to the doctors, the health system is “seriously threatened” by the “disaffection of medical professionals” and there is “no capacity to attract and retain new generations of doctors”.

The Andalusian Medical Union (SMA) called for the mobilisation of its members throughout the months of December and January to denounce that the working conditions of primary care doctors “are increasingly precarious”.

They complain about the lack of personnel, infinite agendas, and that there is no time to assess patients. The unions warn that if the meetings do not lead to successful outcomes, then they will call for a strike on January 27th.

Health professionals in the region have requested that they see a maximum of 35 patients a day and 25 children a day for pediatricians. They have also proposed extending the hours of care into the afternoon in the event that the numbers are greater.

Extremadura: Every Monday from January 30th

In December, the Extremaduran Medical Union (Simex) called for a walkout by both primary care and hospital health professionals on January 26th and 27th.

In addition, it was decided to call an indefinite health strike every Monday from January 30th until the problems of the healthcare workers in the region are resolved.

The deputy secretary general of Simex, María Paz Moro, said that “the strike is motivated by the situation of doctors in Extremadura, especially in primary care, where they treat more than 60 patients a day”.

The primary care doctors’ union Amyts in Madrid called for an indefinite strike that was temporarily called off from December 22nd to January 11th, after a meeting with the Ministry of Health.

But, the union has warned that the stoppages would continue “after zero progress” in the negotiations was made.

“What is really clear is that there is not a sufficient budget for primary care,” said the general secretary of Amyts, Ángela Hernández.

On December 15th a group of doctors in Madrid took the situation into their own hands and decided to lock themselves inside the headquarters of the Ministry of Health of Madrid as a protest, however, they came out after 36 hours as they realised they couldn’t get any food inside.

Doctors in Navarra announced a strike in October for the first few months of 2023 due to the “inaction” of the regional government in the face of the “unacceptable deterioration” of the health system.

After a series of talks, however, the Medical Union postponed the stoppages until February 1st.

The Navarran Health Service (SNS) has responded with a package of measures that the union has considered insufficient.

In Cantabria, primary care doctors reached an agreement with the Ministry of Health in mid-November to postpone their indefinite strike, however, they warned that “it will not be called off until there are guarantees” that the administration “complies” with the demands.

An evaluation of the situation will be carried out on January 17th to assess the progress of the negotiations and to see if new stoppages should be called for. The Medical Union added that “it is a very tense situation because the agreement is not being complied with”.

Although no walkouts have yet been called for in Galicia, SOS Sanidade Pública has called for a general demonstration on Thursday January 12th. They say that primary care is falling apart and repercussions will be seen such as an increase in mortality, the collapse of the ER and the increase in waitlist times.