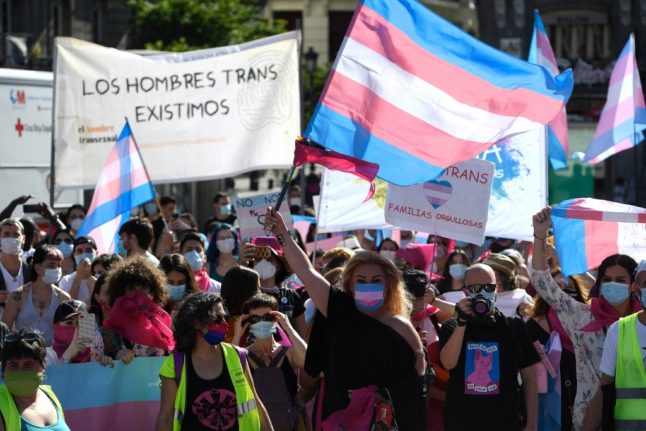 Protesters wave trans flags during a demonstration calling for more rights for transsexuals at Puerta del Sol in Madrid on July 4, 2020. (Photo by PIERRE-PHILIPPE MARCOU / AFP)

Approved by 188 votes in favour to 150 against and seven abstentions, the bill now moves to the Senate where, if left unchanged as expected, it will become law within weeks.

The draft bill effectively simplifies the procedure for changing gender on a person’s national identity card, allowing them to request the change based on a simple statement.

But the text has sparked a bitter dispute among activists in Spain’s powerful feminist lobby and LGBTQ equality campaigners.

In Europe, Denmark was the first country to grant such a right in 2014.

The legislation is one of the flagship projects of the ministry, which is held by Podemos, the radical left-wing junior partner in Prime Minister Pedro Sánchez’s Socialist-led coalition.

“Trans women are women,” said the minister, a strong advocate of gender self-identification who has denounced opposition to the law as “transphobia”.

Until now, adults have been allowed to request the change in Spain with a medical report attesting to gender dysphoria and proof of hormonal treatment for two years, while minors needed judicial authorisation.

But the bill drops that requirement and lets anyone from age 16 freely change their designated sex on their ID card. Even those as young as 12 can apply but only under certain conditions.

After submitting the request, the applicant must confirm the demand three months later, then it will become valid.

The legislation also bans conversion therapies, promotes non-discrimination against LGBTI people in the workplace and seeks “to advance the inclusion” of transgender women in particular who tend to be disproportionately affected.

Friction on the left

Adopted by the cabinet in June 2021, the bill has sparked tensions between Podemos, the driving force behind the legislation, and the Socialists who have tried in vain to modify it.

It has also divided the feminist movement between those supporting Montero and the powerful feminist lobby allied with the Socialists who are implacably opposed to the text.

“When gender is asserted over biological sex, it does not seem to me to be a step forward in a progressive direction; it seems to be a step backwards,” Sánchez’s former deputy Carmen Calvo told El Mundo daily in September.

“The state has to provide answers for transgender people, but gender is neither voluntary nor optional,” said Calvo, who headed the equality ministry when it was held by the Socialists and one of the bill’s most vocal opponents.

Activists fear the law will be open to abuse and erode women’s rights, allowing men who self-identify as women to compete in women’s sport or request a transfer to women’s prisons.

They have also raised the alarm about minors having the right to self-determine gender — with parental authorisation from the age of 14 and with both parental and judicial approval from 12.

Although the Socialists pushed for an amendment that would have extended judicial authorisation to include 14 to 15-year-olds, it was rejected in what was widely seen as a victory for Montero and Podemos.

“The transgender law which will be approved today in parliament symbolises the Socialist party’s biggest defeat by Podemos during this legislature,” the conservative El Mundo newspaper said Thursday, while the centre-left El País said it was “one of the laws that had most strained the coalition government”.

Tensions around the legislation prompted Socialist LGBTQ activist Carla Antonelli — the first and only trans woman to serve as a lawmaker — to resign from the party after decades of activism.

“We have seen part of the Socialist party and the feminist movement go from defending the rights of the trans minority to ruthlessly boycotting our very existence,” she wrote in an op-ed published by El País on Thursday.

Spain has fallen for a second consecutive year in the 2022 Corruption Perceptions Index (CPI) by NGO Transparency International, a global ranking of countries based on their perceived corruption.

Spain dropped one point in 2022, from 61 to 60, and it now sits in 35th place in the world, behind countries such as Botswana and Cape Verde.

Spain’s score represents a three-point decrease from its 2020 score.

Within the EU, Spain sits in the middle of the pack in 14th position out of the 27 member states, two points below both Portugal and Lithuania (62/100) and only one point above Latvia (59/100).

Ten countries recorded the lowest score in their history, including the United Kingdom (73/100), which has fallen five points since last year.

According to the CPI report, a one-point decrease in a year is not necessarily statistically significant nor indicative of major institutional corruption, but consecutive annual falls, such as in Spain, are a “clear sign of risk and danger of continuing decline” in the following years.

Spain has been affected, the report states because it received worse scores due to irregular public service payments, exports and imports, and judicial decisions in cases of corruption. Broadly speaking, Spanish politics has been riddled with ongoing corruption scandals for some time, ranging from the national level down to small-town ayuntamientos (town halls).

READ ALSO: Spain to publish names of politicians who refuse to declare their assets

In 2022 Spanish Prime Minister Pedro Sánchez defended two former Presidents of Andalusia for their alleged corruption in the ERE scandal, and the ongoing environmental scandal at Murcia’s Mar Menor has also been stained by corruption allegations.

Police forces across Spain are no better. The Catalan Generalitat has investigated several cases of corrupt Mossos in its police force in recent years, and port authorities and Guardia Civil agents across Spain, including Catalonia and Algeciras in Andalusia, have been arrested for taking bribes to turn blind eyes to drug trafficking.

During the height of the Covid-19 pandemic, local mayors across Spain were caught out using their position and influence to queue jump and get vaccinations before vulnerable groups.

Juan Carlos I, the now exiled former King of Spain, has also had his fair share of alleged corruption scandals, including but not limited to the Saudi rail payoff scandal; money hidden in Swiss bank accounts; the mystery credit cards paid off by Mexican businessmen; the €10 million found in a Jersey bank account; and, finally, his goat hunting trip with the President of Kazakhstan in which Juan Carlos left with armfuls of briefcases containing over €5 million in cash.

Despite all that, however, in March 2022 Spanish prosecutors dropped all investigations into his finances.

The CPI report in general highlighted the fact that the fight against corruption in the world has stagnated, due in part due to the lingering effects of the pandemic at a legal and administrative level, something many governments around the world were able to capitalise on and reduce transparency.

According to the Index, 131 countries have not registered any significant progress in the last decade, and 27 received their lowest-ever scores in 2022.