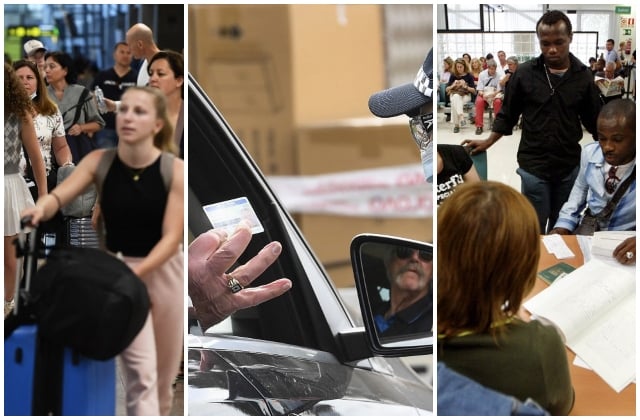 Airline strikes, a potential deal on UK licences and new work visa laws are just some of the changes to expect in Spain in September 2022. Photos: Pau Barrena, William West, Jose Luis Roca/AFP

In a bid to save energy, Spain’s government recently announced a whole host of energy saving measures that come into force from September. Under the government decree, air conditioning must be turned down and set at no lower than 27 degrees Celsius (80.6 degrees Fahrenheit) during the warmest months of the year, in rules affecting everything from public transport to shops, offices, theatres and cinemas.

The legislation also affects heating in winter, when temperatures can be set no higher than 19C.

The decree also requires that from 10:00 pm, shops switch off window-display lighting in a move also affecting the illumination of public buildings.

In keeping with a summer of disrupted travel, Ryanair cabin crew are set to continue strike action until the beginning of 2023. The USO and SITCPLA unions then called a third wave of 24-hour work stoppages from August 8 until January 7, 2023, arguing that Ryanair had refused “to engage in any dialogue”.

The strikes will take place every week, from Monday to Thursday.

Cabin crew at Spanish low-cost airline Iberia Express will also be holding strikes between August 28th and September 6th which are likely to cause delays at best and cancellations at worst.

The same applies to EasyJet’s Spain-based pilots, although it is yet to be confirmed whether they will go on strike in September, with the latest dates marked in the calendar being August 27th, 28th and 29th.

Known as the “Only yes means yes” law, Spain is to tighten its sexual consent laws with a bill that was given the green light by parliament on August 25th with 205 votes in favour and 141 against, meaning it will be in force in September 2022.

It involves a reform of Spain’s criminal code that now defines rape as sex without clear consent.

“Consent is recognised only when a person has freely demonstrated it through actions which, in the context of the circumstances of the case, clearly express the person’s will,” it says.

Until now, rape victims needed to prove that they had been subjected to violence or intimidation.

The new law also tightens the rules on street harassment, expands emotional and sexual education in schools and strengthens protection and compensation for victims of sexual violence.

Yes, you read that correctly. Announced by Spanish Prime Minister Pedro Sánchez in the Spanish Congress last month, the free multi-journey ticket scheme will be for some trains operated by the state owned train network, RENFE, and will come into force from September 1st until December 31st 2022.

Simply put, local and commuter trains will be free. Cercanías, Rodalies (Catalonia), and Media Distancia (local and medium-distance journeys) will be 100 percent free of charge if redeemed with a multi-journey travel pass that uses at least four journeys per month.

Spain’s vuelta al cole (back to school) is almost upon us, and over eight million of Spain’s school students are set to start the 2022-2023 school year in what is hoped to be the first normal school year following the COVID-19 pandemic.

Official back to school dates vary according to the region, but most will return to class (without masks) between Thursday September 8th and Monday September 12th. In Catalonia school restarts a little earlier on Monday 5th, in Madrid Wednesday September 7th, and down in Murcia classes don’t begin until Thursday 15th.

Spain has amended its immigration laws to make it easier for non-EU citizens (UK nationals, Americans etc) to work in the country in a bid to address some of its most pressing labour shortages. The changes will, the government hopes, come into force from September and help resolve some of the bureaucratic obstacles which often prevent Spain from using its migrant population to cover labour shortages.

There are three main changes:

On August 25th, the Spanish Congress of Deputies approved a change of rules for the country’s insolvency laws.

The approved reform seeks to streamline the bankruptcy process for small businesses and self-employed workers in Spain, detect potential bankruptcy earlier and offer alternatives to the liquidation of companies. The government also wants the requirements to be in line with the rest of the European Union’s rules.

In essence, when a company in Spain is experiencing financial difficulties, even if there is no immediate risk of insolvency, it may request an early restructuring in order to avoid a progressive deterioration of its assets, and its creditors will not be able to file for bankruptcy.

The changes, which will enter into force 20 days after its publication in the Official State Gazette (in mid September), likely came too late to stop a flurry of bankruptcy applications as Spain’s Covid bankruptcy moratorium ended two months ago.

After record-breaking temperatures and a sweltering few summer months across Spain, how is the weather shaping up for September? The forecast suggests the trends we’ve seen at the end of August (storms in the east of the country, a fall in temperature, and moderate rain on the northern coast) will continue into early September.

However, the storms and rain will not help Spain alleviate its driest climate for at least 1,200 years caused by an atmospheric high-pressure system driven by climate change.

According to the forecasts, although storms are due in the east there are no signs the rain will be heavy or consistent enough to offset Spain’s drought. If anything, it is feared that sudden rainfall could cause local damage in areas that have recently suffered wildfires.

Finally a deal for UK licence holders in Spain?

Will September be the month when UK licence holders residing in Spain are finally allowed to exchange their permits for Spanish ones and get back on the road? Don’t hold your breath.

The UK Embassy in Madrid has not provided affected drivers with an update since August 12th, which in any case didn’t offer any new information.

August is after all a holiday month when not many official matters get finalised in Spain, but even when Spain’s bureaucratic army of civil servants are back at the office, things tend to go slowly.

Writing on the UK Embassy’s Brits in Spain Page, the Embassy stated on July 29th that “Once the negotiation teams have agreed the text, it will then go forward for final legal and political approvals. On the Spanish side, this means going through the ‘Consejo de Ministros’ (Spanish Cabinet).
“On the UK side, it will be approved by relevant Ministers. Then it will be published in the BOE (state bulletin) and should come into force the same day. You will then have six months to exchange your UK licence for a Spanish one (without having to take a test) and during that time you will be able to drive using your UK licence.”
That’s a lot of toing and froing that has to happen in the space of a month, but here’s to hoping. 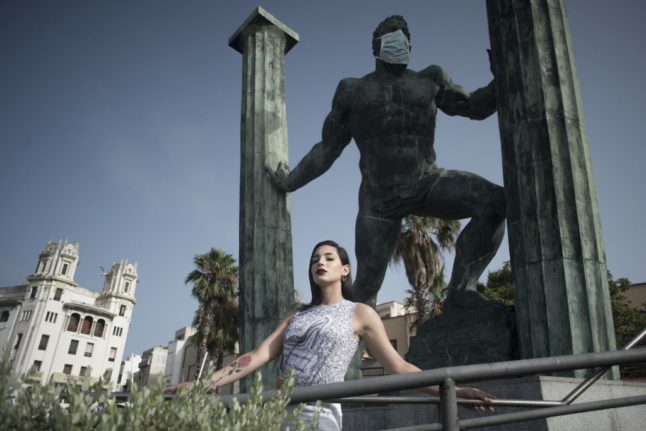 SPANISH LAW
IN DEPTH: What is Spain’s ‘Trans Law’ and why is it controversial?

Parliament on Thursday approved a bill to reform the criminal code to drop what Spain’s left-wing coalition government sees as an antiquated offence, replacing it with one better aligned with modern European norms.

And the change should be in place before the year’s end, Spanish media reports say.

In response, the far-right Vox party has called a protest in Madrid on Sunday, while the right-wing opposition Popular Party (PP) has convened rallies across the country to express its opposition.

Right-wing parties say eliminating sedition — the charge used to convict and jail nine Catalan separatists over their involvement with a failed 2017 independence bid — will pave the way for another attempt to separate from Spain.

Initially condemned to between nine and 13 years behind bars, the separatists were pardoned last year by the leftist government, drawing fury from the Spanish right.

“Great for those in Catalonia who want to stage another coup!” PP lawmaker Edurne Uriarte told a parliamentary debate over the planned law changes.

Spain says its efforts to have them extradited have failed because many European countries simply don’t recognise sedition as a crime, with the bill seeking to reframe the offence as an “aggravated public disorder”.

The bill aims “to reform the crime of sedition and replace it with an offence comparable to what they have in other European democracies,” Sánchez said earlier this month.

“The crimes committed in 2017 will continue to be present in our penal code, although no longer as crimes of sedition… but as a new type of crime called an aggravated public disorder,” he said.

But even Puigdemont has expressed misgivings about the legal change, saying those separatists celebrating the move “have learned nothing from the last five years”.

The new offence would carry a maximum penalty of five years behind bars, compared with 15 years for the crime of sedition.

Opposition leader Alberto Núñez Feijóo asked Sánchez to “clarify whether he is actually reforming the crime of sedition to protect Spanish democracy or whether he is just trying to politically survive” — implying the bill was payback for pro-independence party support in parliament.

“The PP’s stance is clear: we will increase the penalties for sedition and rebellion, we will make them criminal offences and will make the holding of an illegal referendum a crime,” he said of his party’s position, with a general election on the horizon.

Some reluctance on the left

The PP managed to ensure Thursday’s vote was vocal, a rare procedure in Spain in which lawmakers verbally declare their support or opposition for a bill, in a move forcing the more reluctant Socialists to lay their cards clearly on the table.

Spain’s criminal code currently defines sedition as “publicly rising up and using mass disorder to prevent the implementation of laws, by force or through means outside the law”.

More succinctly, the Royal Academy of Spanish Language defines it as a “collective and violent uprising against authority, against public order or military discipline without reaching the gravity of rebellion”.

The crime has survived various reforms of the legal code, the last of which was in 1995, but its critics say it dates back to the 19th century.

“We are revising a crime that was enacted in 1822 in Spain, dating back 200 years to when there were still military uprisings,” Sanchez said earlier this month, pointing to Germany, where sedition was abolished in 1970.

But reclassifying it as an aggravated public disorder hasn’t satisfied some on the left who fear it could be used against demonstrators.

“It concerns us… (that the new offence) could have some limiting effect on the right to peaceful protest,” argued Pablo Echenique, spokesman for the hard-left Podemos, the Socialists’ junior coalition partner which was behind the moves to abolish sedition. 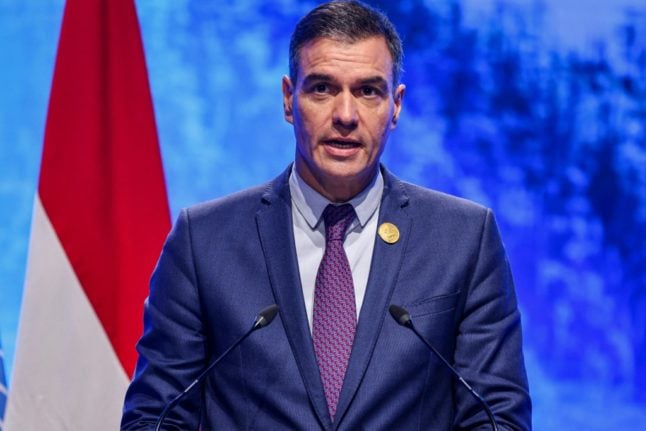