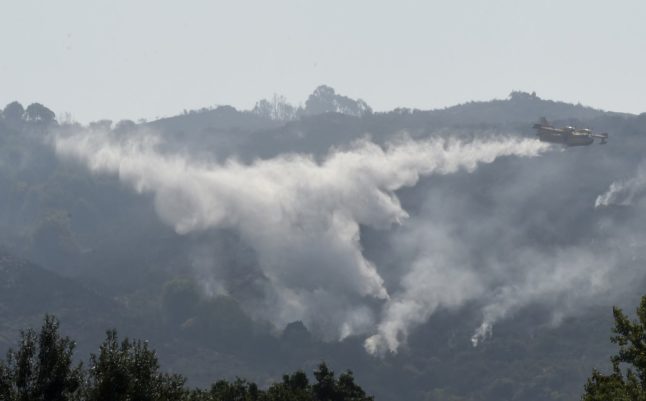 A Canadair CL-425 firefighting airplane drops water over a wildfire near the village of Verin, northwestern Spain, on August 4, 2022. - Firefighters were making progress in their efforts to put out a forest fire, apparently of criminal origin, which broke out on August 3 in the region of Galicia (northwestern Spain) and has already destroyed 600 hectares. (Photo by MIGUEL RIOPA / AFP)

Fanned by strong winds and a heatwave, the blaze has already destroyed some 600 hectares (1,500 acres) of forest and scrubland in Galicia, the regional government said in a statement.

“Everything indicates it was started intentionally,” it said.

The fire started out on Wednesday in several spots near the town of Verin near the border with Portugal, which is experiencing its worst drought in a century.

They authorities said the blaze did not currently pose a threat to “inhabited areas”. 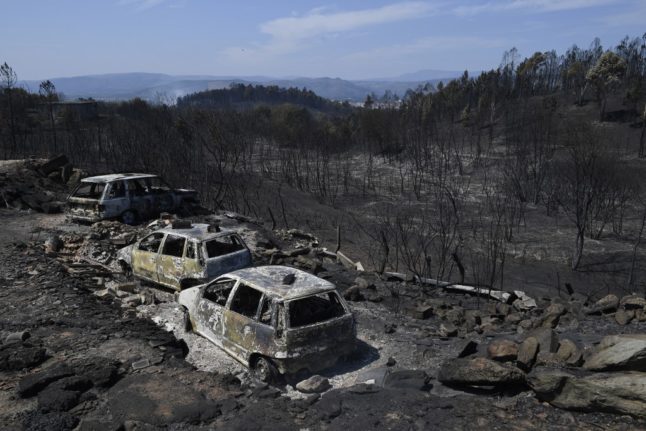 Burnt cars following a wildfire near the village of Verin in northwestern Spain. (Photo by MIGUEL RIOPA / AFP)

Spain has battled 354 wildfires since the start of the year, fuelled by scorching temperatures and drought conditions.

The flames have destroyed nearly 230,000 hectares, more than in any other nation in Europe, according to the European Union’s satellite monitoring service EFFIS.

Temperatures are set to soar above 40 degrees Celsius (104 degrees Fahrenheit) on Thursday in the south and east.

So far this year, Spain has suffered nearly 400 wildfires following punishing heatwaves and long dry spells that have devastated more than 283,000 hectares of land, more than three times the total area destroyed in 2021.

Over the past week, hundreds of firefighters have been battling two major wildfires raging out of control in the Valencia region.

A bout of heavy rainfall offered some respite, almost totally extinguishing the flames.

Although it put an end to the Vall d’Ebo fire near Benidorm, the Bejís blaze some 70 kilometres (45 miles) northwest of Valencia city, flared up again and burning its way towards the Sierra Calderona natural park.

“The fire advanced slowly during the night except in… areas to the southeast where it has raged more aggressively,” the emergency services tweeted, indicating 35 aerial firefighting teams were trying to contain the blaze.

WATCH: Passengers trapped on train engulfed by flames during huge wildfire in Spain

“There are flames all along the perimeter,” it added.

The UME military firefighting said on Twitter it had been an “intense night” in Bejís, posting images of huge flames.

“It’s a very big fire with a perimeter stretching more than 120 kilometres so we’ve using all the means we have to contain the fire,” Mariano Hernández, one of the provincial fire chiefs, told public television.

Early on Friday another blaze began at Olocau inside the Sierra Calderona park, some 40 kilometres southeast of Bejis, the emergency services said.

It added that local residents had been “confined to their homes as a preventative measure”.

The Vall d’Ebo fire began on Saturday and the Bejís blaze two days later, forcing some 3,000 people to be evacuated in total.

According to @CopernicusEMS #EFFIS, 250,000 ha have been burnt since 4 June

So far this year, Spain has been hit by 391 wildfires, the latest figures from the European Forest Fire Information System show.

The fires have destroyed more than three times the area consumed by wildfires in the whole of 2021, which totalled over 84,000 hectares, the figures show.