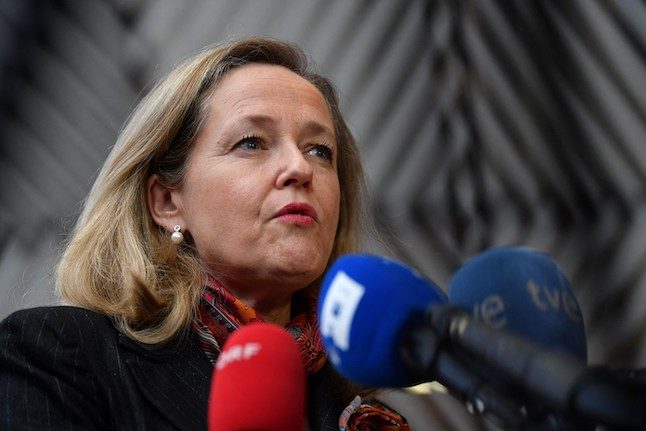 The gross domestic product of the eurozone’s fourth-largest economy is now expected to expand by 2.7 percent instead of the 3.5 percent previously forecast, Economy Minister Nadia Calviño said.

The Ukraine conflict “is having major economic and social consequences at the global level and for this reason all economic bodies and governments are revising down their growth forecasts,” she told a news conference.

The Spanish economy will also suffer from the “tightening of monetary conditions” linked to the rise in interest rates and the economic slowdown expected in the eurozone which will hurt exports.

The government maintained nevertheless its growth forecast of 4.3 percent for 2022.

It had initially envisaged a growth of 6.0 percent for this year, reasoning that the impact of the Covid-19 pandemic would ease, but in April it revised its forecast because of the war in Ukraine.

The minister stressed that Spain’s GDP growth in both 2022 and 2023 would still be higher than that of other major European economies despite the “very uncertain context” marked by “strong geopolitical tensions”.

The European Commission predicts the Spanish economy will expand by 4.0 percent in 2022 and by 2.1 percent next year.

It sees growth of 1.4 percent in Germany this year and of 1.3 percent next year.

International non-profit Climate Group compiled the rankings of G20 countries based on both ambition and progress.

“What we’ve recognised at the Climate Group over a number of years is the importance of the policy environment to enable rapid action on renewables,” Mike Peirce, the organisation’s executive director of systems change, told AFP.

The report – published during New York’s annual Climate Week on the sidelines of the UN General Assembly – is designed with a group of 380 leading businesses in mind, called the RE100 companies, that have committed to go 100 percent renewable.

Twenty countries, including Spain as a permanent guest of the G20, were given grades from A to E.

Spain, which got an A, was lauded for setting out to deliver “one of the most ambitious renewable power policies in the European Union,” with all new power capacity additions over the last decade coming from green energy.

Renewables accounted for 21 percent of Spain’s total final energy consumption in 2020, surpassing its goal of 20 percent, with plans to increase this to 43 percent by 2030 and 97 percent by 2050 when it is due to reach its climate neutrality goal.

India, which got a C, ranks fourth in the world for installed renewable power capacity with 158 gigawatts – but while there are key signs of ambition from the central government, the report cited high capital costs and grid connection challenges as significant headwinds.

Brazil and Canada were termed “stragglers,” both receiving Ds despite having an abundance of hydropower, with the report urging more diversification as severe droughts have put future energy generation at risk.

The percentage of renewables in Canada’s total final energy consumption slipped slightly from 25.8 percent in 2009 to under 25 percent by the end of 2019. While Canada is targeting net zero by 2050, it lacks any interim dates for checkpoints along the way.

To do better, countries must lay out strong roadmaps with key interim targets, implement financing solutions to drive investor confidence.

“As Europe buckles under the weight of the energy crisis, its leaders are regretting that they didn’t transition from fossil fuels faster. They mustn’t lock themselves in to further damaging emissions,” Peirce said.

MONEY
Euro falls to 20-year low against US dollar
Url copied to clipboard!