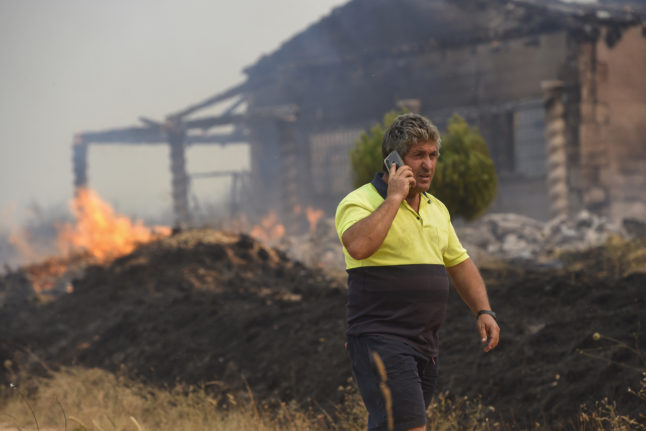 Forest fires raging across Spain have already broken annual records in terms of hectares destroyed, with another grim milestone for the highest number of wildfires in a single year set to follow.

Just over 200,000 hectares (495,000 acres) of forests in Spain have been lost to fire so far this year, according to the European Union’s satellite monitoring service EFFIS.

As well as wreaking havoc across the local landscapes, they can be particularly damaging to our health too.

Experts say that even more dangerous than getting burned by the fires themselves, is breathing in the smoke from them. This is in fact the leading cause of death during a fire.

This means even if you’re not actually that near the fire, the smoke in the air can still affect you.

According to the experts, pollutants and smoke particles from wildfires can travel thousands of miles away, so even if you’re in the next town, you may be at some risk.

What are the effects of smoke inhalation?

If a forest fire is particularly big and rages for a long time, like we have seen this summer in Spain already, then the damage from smoke inhalation can be particularly bad.

Particles from fires are very small – one-third the diameter of your hair, according to the American Lung Association, and can therefore easily get lodged deep in your lungs.

Fumes from these fires can cause coughs, irritated eyes, an itchy nose and scratchy throat. It can also be dangerous for those who are vulnerable and suffer from respiratory problems such as asthma.

Children, pregnant women and the elderly are particularly vulnerable when exposed to smoke. It has been found that these people are more likely to get coughs, colds and bronchitis after breathing in fumes from fires.

According to Cristina Martínez, an expert from the Spanish Society of Pulmonology and Thoracic Surgery, smoke is not only dangerous because of the particles it emits, but also because it can raise temperatures further. Smoke alone can cause burns inside your respiratory system, such as in your throat and your lungs.

Remember that if you have inhaled a lot of smoke, you should get checked out by a doctor, even if you feel fine, your insides might not be.

How can I minimise the damage to my health?

Chief fire officer for Madrid Víctor Prieto says that to eliminate these health risks, you should listen to the authorities and stay inside if it’s safe to do so. He also encourages people to close all doors and windows to make sure the smog doesn’t get inside the house.

If you do have to go outside, it’s important to make sure your nose and mouth are covered with a mask, so the air is filtered before you breathe it.

Remember to also always call the emergency services if you spot a forest fire. Even if it’s small, it can quickly get out of control.

HEALTH
UV Index: Where in Spain you have to take extra care with sun exposure
Url copied to clipboard!