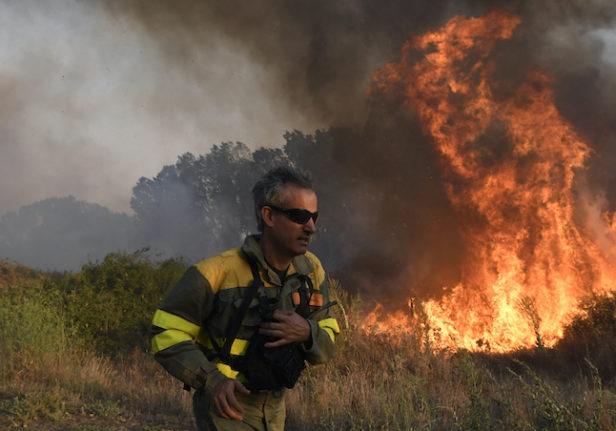 Why are there so many wildfires in Spain? Photo: MIGUEL RIOPA / AFP

Wildfires have been sweeping across Spain this summer and some of the worst affected regions have been Extremadura, Castilla y León, Galicia, Andalusia and Catalonia.

This year in Spain has been the worst for forest fires in the last 10 years. Just over 200,000 hectares (495,000 acres) of forests in Spain have been lost to fire so far this year, more than in any other nation in Europe, according to the European Union’s satellite monitoring service EFFIS.

Some of the biggest fires have been in Zamora in Castilla y León, Las Hurdes in Extremadura and the National Park of Monfragüe.

In Tenerife, 2,700 hectares have been burned and 600 people have been forced to leave their homes.

While of course there has been an increase in fires because of the extreme heatwave over the past month, which has seen much of Spain experiencing temperatures well above 30°C and even into the low 40s, this is not the only cause.

It has been revealed that 54 percent of forest fires in Spain are started intentionally.

“Around 96 percent of wildfires are caused by human activities and more than half, 54 percent of them are started intentionally”, said Raúl de la Calle, general secretary of the Association of Forestry Technical Engineers.

READ ALSO – MAP: Where are wildfires raging in Spain?

How and why are they started intentionally?

According to the latest data from the Environmental Prosecutor’s Office, there were at least 179 people investigated and arrested for intentionally starting fires in the first half of 2022.

While not all the reasons for starting fires intentionally are known, the most common reasons that have been revealed by the Forest Fire Statistics (EGIF) from the Ministry of Agriculture are to remove scrub and agricultural waste, to regenerate grass for livestock, pyromaniacs, vandalism and to making hunting easier.

Heat and lack of rain

Of course, not all forest fires in Spain are started deliberately. The high temperatures, winds and dry plant material, due to lack of rain in summer, all provide the perfect ingredients for fires across the country.

Declining rural populations in some of Spain’s regions are also causing more fires as fields are abandoned and plant life is left to grow wild. There are also fewer farm animals to help clear the land of scrub.

Spain’s Ecological Transition Minister Teresa Ribera last week stressed the importance of rural residents, saying they are “the real guardians of the land who are on the front line in the prevention of fires all year round”.