British rock legends The Rolling Stones (known simply as Los Rolling in Spain) on Wednesday open their European tour with a concert in Madrid to mark six decades since the band was formed.

Frontman Mick Jagger, 78, and fellow band members Keith Richards, also 78 and Ronnie Wood, who turns 75 today, arrived in the Spanish capital last week and have since been enjoying the city like tourists, visiting some of Madrid’s most famous sights.

They have been enjoying the week in luxurious style, staying at the recently-opened Rosewood Villa Magna hotel in the well-heeled Barrio de Salamanca.

“Sympathy for the Devil in Madrid. The Stones are in town! Countdown to the first show is on!” they wrote on Instagram, posting a picture of the Fallen Angel fountain in Madrid’s famed Retiro Park, referencing one of their best-known songs.
Jagger also posted several pictures to both Twitter and Instagram with a caption saying “Enjoying lots of what Madrid has to offer, from fallen angels to Flamenco!”

Mick Jagger in Retiro Park in Madrid. Photo: @mickjagger / Instagram
In the first picture, he poses in front of the Fallen Angel statue found in Retiro Park. In Spanish, it’s called La Fuente del Ángel Caído and can be found at the southern end of the park, not far from the gate of the same name.
The statue was sculpted by Ricardo Bellver in 1878 for the Paris World Fair and was later bought by Madrid City Council, who commissioned the architect Francisco Jareño to design the pedestal it stands on. It was officially inaugurated in 1885. 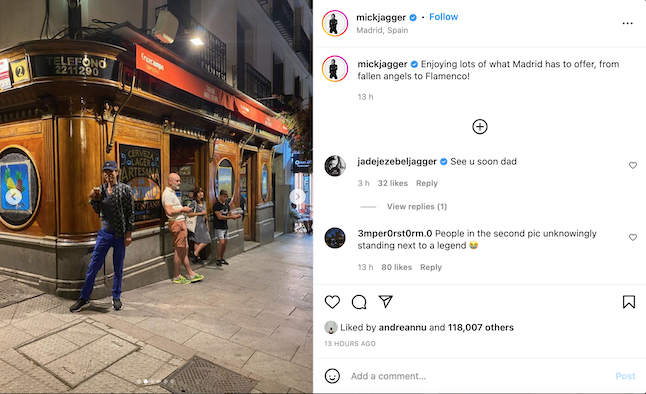 Mick Jagger in Madrid. Photo: @mickjagger / Instagram
In the second picture, Jagger poses outside the Taberna de Ángel Sierra in Chueca neighbourhood, a historic tavern which is known for being one of the oldest in Madrid at over 102 years old.
This emblematic bar is known for its iconic decoration –  its elegantly-carved wooden bar, its century-old bottles lining the walls, its antic wine barrels, and original vermouth taps. 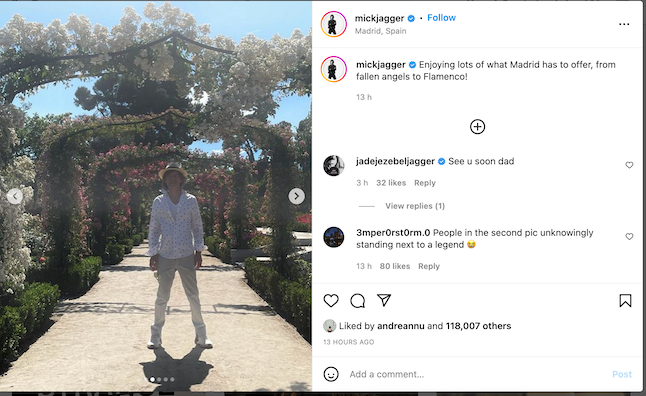 Mick Jagger in Madrid’s Retiro Park. Source: @mickjagger / Instagram
Jagger spent more time in Madrid’s best city park, posting another photo of himself posing under arches of colourful flowers. He was most likely enjoying Retiro’s Rosaleda rose garden. El Retiro is one of Madrid’s largest city parks, covering over 125 hectares and home to more than 15,000 trees. In July 2021, it was declared a UNESCO World Heritage Site, together with the nearby Paseo del Prado. 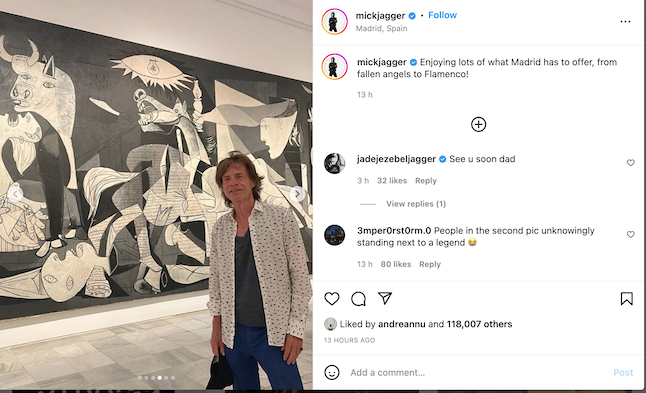 Mick Jagger posing with Picasso’s Guernica in Madrid’s Reina Sofia. Photo: @mickjagger / Instagram
Jagger is also seen posing with one of the Reina Sofía Museum’s most celebrated artworks – Guernica by Pablo Picasso. The painting commemorates the bombing of the Basque town of Guernica during the Spanish Civil War in 1937.
Along with El Prado and the Thyssen-Bornemisza, the Reina Sofía is part of Madrid’s so-called Golden Triangle, home to its very best museums. The Museo Nacional Centro de Arte Reina Sofía is home to a vast collection by some of Spain’s greatest contemporary artists such as Salvador Dalí, Antoni Tàpies and Joan Miró.
Jagger’s last slide is actually a video of a flamenco rendition of one of The Rolling Stones’ most beloved songs – Paint It Black (skip to final slide to watch).

Now you know where to go in Madrid to tour the capital like a Rolling Stone  👅!