A sheep grazes at the natural park of Collserola, near Barcelona on May 12, 2022. (Photo by Pau BARRENA / AFP)

Since April, Barcelona city hall has employed 290 sheep and goats to munch undergrowth at the Collserola National Park on the outskirts of Spain’s second-largest city.

The aim of the pilot scheme is to reduce the risk of wildfires by clearing vegetation in an environmentally friendly way. It also helps educate the Mediterranean port city’s 1.6 million residents about the countryside.

“The biggest challenge is re-educating people about rural life,” said Daniel Sánchez, one of the shepherds, as he took the animals out to graze.

The 36-year-old moved to Barcelona from Sant Llorenc Savall, a town some 50 kilometres (30 miles) further inland, to look after the herd. He sleeps in a shed in the park near the sheep and goats.

The 8,200-hectare (20,262-acre) park is 22 times bigger than New York’s Central Park and eight times larger than the Bois de Boulogne in Paris.

Its viewing points offer sweeping vistas of Barcelona, and hiking trails make it popular with joggers, cyclists and people out for a walk.

“Every year it catches fire,” said Sergi Dominguez, a 52-year-old maintenance worker who was in the park walking his dog. 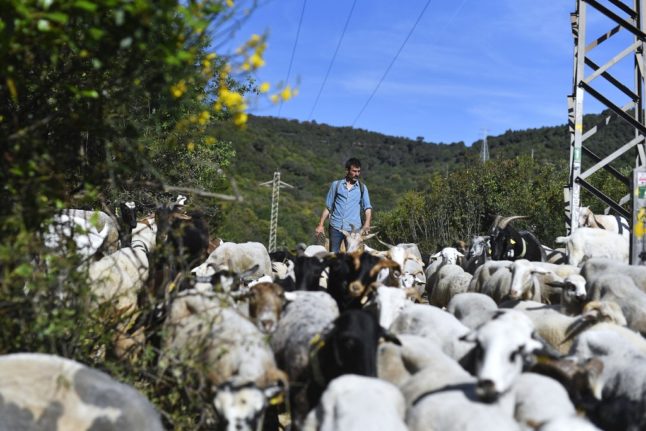 Spanish shepherd Daniel Sánchez, 36, herds his flock of sheep and goats at the natural park of Collserola, near Barcelona on May 12, 2022. (Photo by Pau BARRENA / AFP)

The sheep and goats “eat the scrub and that is the best thing that can happen”, added Dominguez, pointing to the dry vegetation. He said he hoped the flock would return next year.

The project ends in June. If it is deemed a success, the authorities may expand it to other green areas.

Ferran Paune, the biologist and livestock farming expert in charge of the project, said the area posed a “very high risk of wildfires”.

“We are in a Mediterranean zone. On top of that, it’s overcrowded, with many urban areas and people living in woodland,” he added. 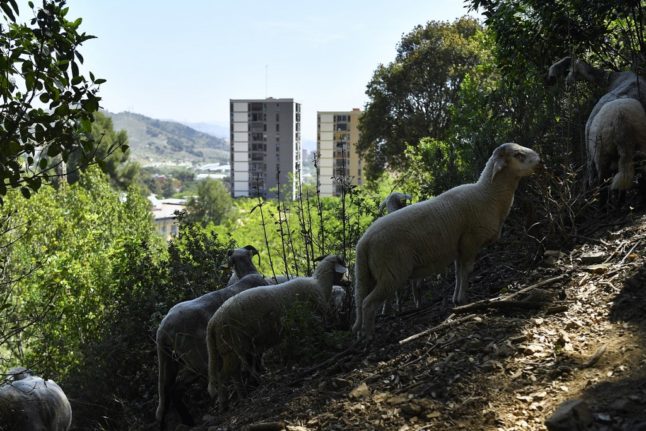 The aim of the pilot scheme is to reduce the risk of wildfires by clearing vegetation in an environmentally friendly way, while also helping to educate the Mediterranean port city’s 1.6 million residents about rural life. (Photo by Pau BARRENA / AFP)

“This natural park could burn completely in just eight hours, which could cause a very serious problem — people needing to be evacuated or being injured.”

The goats and sheep appear to have adapted “perfectly” to the urban park, Paune said.

But Sánchez, who gave up a career as a lighting technician a decade ago to become a shepherd, said he was “getting tired” of the city noise and the night-time light pollution.

“I think I hear a sheep screaming and then I realise it’s actually an ambulance siren,” he said.

“Or I want to listen to the herd and there’s a hospital helicopter coming in to land.”

The Old Town or Ciutat Vella is one of the most-visited areas of Barcelona and includes well-known tourist areas such as the Gothic Quarter, Las Ramblas and El Born. Here, it’s not uncommon to see large tour groups, blocking up the narrow streets and stopping the flow of pedestrians.

The new restrictions were announced by the councillor of the Ciutat Vella district, Jordi Rabassa, and the councillor for Tourism and Creative Industries, Xavier Marcé and are to be put on public display to ensure all potential disagreements can be solved before the rules come into force, which could be as early as the end of July 2022.

While groups will be limited to 15 people within the Ciutat Vella, in the city’s other neighbourhoods, where streets are slightly wider and it’s not so crowded, up to 30 people will be allowed per group.

Barcelona City Council has also introduced restrictions on the number of tour groups that can enter certain areas at one time. For example, a maximum of eight tour groups will be allowed in the central Plaça Sant Jaume, where the Ayuntamiento is located, five groups will be permitted to enter the colonnaded Plaça Reial, while a limit of three groups can visit the squares around the old Santa María del Mar church in El Born.

This restriction will affect 13 different areas throughout the city.

The new rules will also introduce 24 one-way pedestrianised areas, where the concentration of tourists is even greater, in a bid to stop a bottleneck of people.

The aim is to make sure that streets are not clogged up by tourists, preventing locals from going about their daily life and accessing areas where they live, work, socialise and run errands.

Other rules which will apply to tour groups across the whole city include banning the use of megaphones and making sure that at least 50 percent of the street is left free for others to use.

Barcelona suffered from over-tourism before the Covid-19 pandemic began and in 2019 received a record number of visitors of almost 12 million. This summer has seen a huge increase in tourists after numbers dropped dramatically in 2020 and 2021, and hotel occupation is already at 100 percent for July and August.