Spanish far-right Vox party president Santiago Abascal has said the cause of Ukrainian refugees arriving in Spain is more justified than the "invasion of young people" of Muslim origin that "attack" the borders of Europe. (Photo by Pau Barrena / AFP)

They have previously supported People’s Party (PP) regional governments in Madrid, Murcia and Andalusia with their votes, but the entry into the Castilla y León government is the first time Vox has officially entered government and will have a direct say in policy.

In France far-right presidential candidate Marine Le Pen got to the second round of elections recently, and politics across Europe and the world more broadly is increasingly polarised.

Vox are known to be openly anti-immigration, anti-Islam, and climate change sceptics.

With a general election looming over Spanish politics in the near future, and the incumbent PSOE government having had the vast majority of its term hampered by the Covid-19 pandemic, it seems likely that the right are set to enter into Spanish government once again.

But will national politics follow the emerging trend at the local level? Will Vox prop up PP nationally, and soon have a say in national politics? What do they stand for, and what would a Vox government mean for foreigners in Spain?

The Local has had a look at their main policy ideas on immigration to try and get a better idea of what a Vox government might look like, and how it’d affect foreigners.

Illegal deportation of all illegal immigrants

According to Vox’s own policy agenda on its official website, the number one priority in its immigration agenda is the deportation of all illegal immigrants. While experience would suggest that Vox has a particular sociological profile in mind for the type of immigrant lined up for deportation, one has to wonder how many Latino migrants that would include, or how many Brits staying illegally in urbanisations up and down the Costas, or if Vox would be as concerned about those types of migrants as they make out.

Perhaps leader Santiago Abascal’s recent comments in the Spanish Congress on how “anyone can tell the difference” between Ukrainians arriving in Spain following Russia’s invasion and, in his words, “young military-aged men of Muslim origin who have launched themselves against European borders in an attempt to destabilise and colonise it.” What exactly is the difference, we wonder?

Similarly, Vox proposes the deportation of legal migrants who have committed crimes in Spain and regularly cites statistics about the proportion of crimes committed by immigrants, although there is no data available on the breakdown between legal and illegal immigrants with regards to crime.

Vox leader Santiago Abascal can always be relied on to hit on a handful of key talking points wherever he goes, whatever he’s talking about, and whatever the topic. One of those is the migrant situation in Spain’s north African territories, Ceuta and Melilla. In one of Abascal’s many pieces of populist rhetoric alluding to former President Trump, Vox has said it would militarise Spanish borders in north Africa. Build a wall? Maybe.

In reality Spain’s borders are already heavily militarised with the help of EU funding, and under the Sanchez PSOE government Spain is already facing challenges in human rights courts, but this process would be turbo-charged if Vox ever got anywhere near La Moncloa.

Vox have regularly used unashamedly (and often false) anti-immigrant propaganda during election campaigns. In Madrid a poster depicting a young, dark-skinned, hooded male was put up in metro stations, claiming that an immigrant minor would cost taxpayers a large sum of money each month, and comparing that with a grandmother who would only receive a measly pension.

Expect the blatant anti-immigrant propaganda to continue if Vox gets a seat in government at the national level.

Vox would also increase the required period of residency to gain citizenship from ten to fifteen years, banning nationality applications from those with criminal records either in Spain or their country of origin and requiring people to give up their other nationalities.

Overall, Vox’s aim is to ensure the ius sanguinis (“right of blood”) is always greater than the ius solis (“right of land”), so that lineage prevails over the place of birth when obtaining nationality. This has widely been understood as a discriminatory measure against north African migrants, but does come as part of broader efforts to prioritise Latin Americans with Spanish heritage. 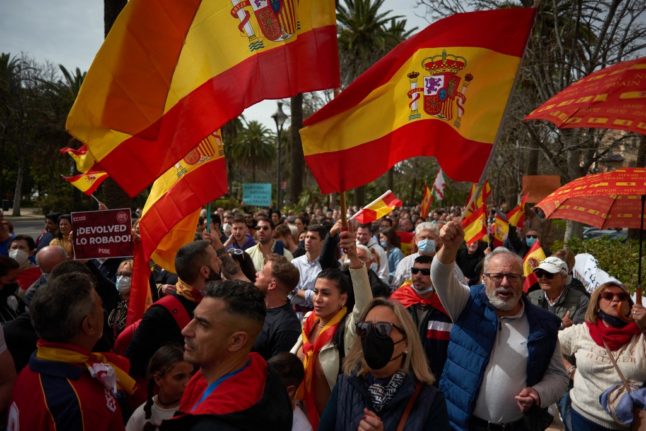 In a classic piece of nativist rhetoric, Vox would prioritise Spaniards and “national priority” when accessing social housing, rental subsidies and various other types of social welfare. Despite being largely economically liberal, and against state intervention and welfarism, Abascal made his “national priority” policy speech – in Ceuta, of course – clear that any welfare that does exist will be given to Spaniards first, and foreigners (legal or illegal) second.

Getting rid of the ‘arraigo’ process

There exists a process in Spain that allows for some undocumented immigrants to claim residency after living in Spain for a certain period if they can prove familial or employment links to Spain, demonstrate extraordinary circumstances, or, after three years, prove they have lived in Spain continuously. The arraigo is for non-EU citizens wishing to formalise their status in Spain. In it’s 2018 electoral programme, Vox included among its policies scrapping the arraigo option for undocumented migrants as well as other fast-track options for obtaining nationality.

Vox has also promised to raise the required standard to pass the Spanish language and cultural and history exams in the process of getting nationality.

With uncertainty looming over the rock in the drawn out Brexit deal negotiations, a Vox government would undoubtedly spark nationalist rhetoric and increase tensions on the border. Vox have regularly held rallies directly across the border in La Línea de la Concepción, even planted a Spanish flag there, and regularly spout nationalist rhetoric about Gibraltarians being pirates and parasites, and that the Rock is Spanish (Gibraltar es Español) in order to rile up blood and soil nationalist sentiment.

A key point for Britons in both Spain and Gibraltar – if a Brexit deal regarding Gibraltar isn’t made before the next general election and Vox play a minority role in a national government, which is an unlikely but plausible outcome, it is likely negotiations will be have to be completely restarted and any progress made torn up.