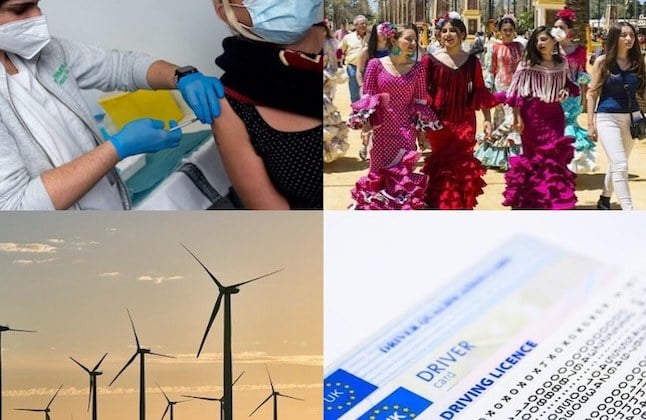 Bank holiday for some regions

Many regions in Spain celebrate the Día del Trabajador or International Workers’ Day, but as this year May 1st falls on a Sunday, several regions have decided to push the holiday over to Monday May 2nd, creating a long weekend.

According to the work calendar of the Government of Spain, seven regions have chosen to move the holiday to Monday. These are Andalusia, Aragon, Asturias, Castilla y León, Extremadura, Murcia and Madrid.

This year, the long weekend coincides with Spanish Mother’s Day on May 1st.

Spain’s Hipra vaccine to be on the market in May

Spain’s Minister of Science and Innovation, Diana Morant, has announced that the Spanish vaccine against SARS-CoV-2 (Covid-19) from Hipra laboratories could begin to be marketed, after the green light from the European Medicines Agency (EMA) at the end of May.

Hipra, which has received €18 million in aid from the ministry for development and production, is to be the first Spanish vaccine against Covid-19.

Going by the brand name PHH-1V, the Hipra shot is being developed as a booster vaccine for adults who have already been fully vaccinated with a different COVID-19 vaccine.

READ ALSO: What you need to know about filing your Spanish tax return in 2022

If you would rather file your annual income tax in person you’ll have to wait until June 1st, but alternatively the whole process can be done online. Here’s our step-by-step guide to completing your Spanish tax return.

If you’re not sure if you have to file an income tax return in Spain, this article will help.

Fourth Covid vaccine for over 80s and care home residents

According to a report by Spain’s Vaccine Committee published on April 18th, Spanish health authorities will most probably start to offer a second booster dose to over-80s and care home residents in early May 2022.

On April 6th, the European Medicines Agency (EMA) and the European Centre for Disease Prevention and Control (ECDC) backed a second booster dose for over-80s, but added that it was “too early to consider using a fourth dose of mRNA COVID-19 vaccines (Pfizer’s Comirnaty and Moderna’s Spikevax) in the general population”.

Energy prices to fall in May

Spain and Portugal have agreed with the European Commission to set a maximum of €50 for the price of gas over the next 12 months, a measure that will make it possible to lower the energy bill from May by between 30 and 40 percent.

Electricity prices on the Iberian Peninsula will be slashed under an exemption allowing them to separate the price of gas from that of the rest of the European Union.

This measure will lead to a substantial drop in the price of the wholesale electricity market. According to Madrid, around 40 percent of households should benefit from the system, and between 70 and 80 percent of companies will be affected.

On April 29th, the British Embassy in Madrid announced that the UK-issued driving licences of people who’ve been residing in Spain for more than six months will no longer be valid from May 1st 2022, adding that they will “rapidly accelerate talks” to find a solution but giving no further grace period to drivers left in limbo.

The last-minute announcement, posted just hours before the April 30th deadline for UK licence validity, confirms one of the worst case scenarios for British driving licence holders living in Spain.

“Driving a vehicle without a valid licence is illegal in Spain,” the UK embassy stressed.

“If you are affected by this change and need to drive, you should not wait for the outcome of the negotiations and should take immediate steps to apply for a Spanish licence – as we have been advising for some time now.”

Spanish authorities have previously given UK driving licence holders four grace periods (of three or two months in length each), but there has been no further extension of UK licence validity granted this time.

So does this mean there is no deal and UK drivers residing in Spain will have to sit their practical test with a Spanish-speaking examiner to get a Spanish licence?

It’s still unclear. According to the British ambassador, Spanish and British authorities have “agreed to rapidly accelerate talks next week in the hope of reaching an agreement soon as we already have in almost every other EU Member State”.

The Spanish government on April 30th extended again temporary restrictions for non-essential travel from most third countries, but this time only for two weeks.

That means non-EU/Schengen adults who reside outside of the EU and haven’t been fully vaccinated against Covid-19 or recently recovered from the illness cannot go on holiday to Spain until at least May 15th.

In other words, Spain continues to not accept negative Covid-19 tests from British, American, Canadian, South African or other third-country nationals who are neither vaccinated nor recently recovered.

Earlier extensions of the July 2020 regulation were usually for another month, but on Saturday April 30th 2022, Spanish health authorities announced they would only extend the restrictions on non-essential travel from outside of the bloc for just 15 days.

This suggests that it may be only a matter of weeks before Spain fully reopens to all non-EU/Schengen tourists even if they aren’t vaccinated or recently recovered from Covid-19. Whether they will have to provide a negative Covid test to be allowed to enter Spain remains to be seen.

Fiestas are back on

Many of Spain’s beloved festivals are back on this May after a two-year hiatus during the pandemic.

Seville’s famed Feria de Abril, celebrating everything to do with flamenco, horses and Andalusian culture will be held from May 1st until May 2nd, while Córdoba’s Fiesta de Los Patios will be on from May 3rd until the 15th, where visitors will be able to see inside the city’s gorgeous courtyard gardens, decorated with all manner of flowers.

Other May celebrations taking place include the Cruces de Mayo, where floral-decorated crosses are set up in several cities across the country and Girona’s Temps de Flors flower festival.